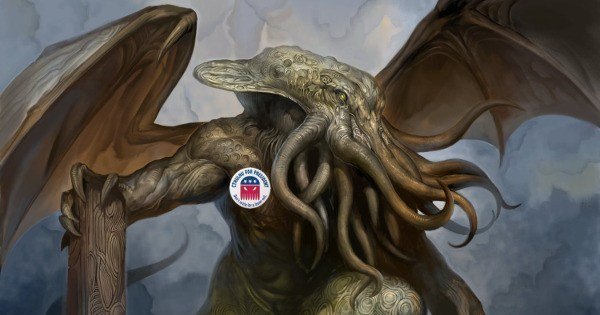 Cthulhu emerged from the black depths of the Pacific Ocean and proceeded to answer questions about hot button issues such as gun control, Obamacare, and how to handle the growing threat of ISIS.

Though the aquatic deity’s presence drove most of the reporters insane, a few were able to stave off the madness long enough to report that Cthulhu’s plan to handle ISIS involves unraveling the very fabric of reality. “Now that’s how you handle terrorists!” said FOX News commentator Bill O’ Reilly who was covering the conference by satellite. “Just wipe ’em all out of exist-” O’Reilly started to continue before the otherworldly timber of Cthulhu’s voice caused his head to burst like a rotten melon hitting pavement.

CNN’s Anderson Cooper managed to ask the ancient entity what his thoughts were on health care before Cthulhu’s answer—he favors a universal system where everyone dies—caused him to melt into a puddle of viscous fluid.

Cthulhu pleased conservatives and liberals alike when he promised to end both abortions and gun related casualties by turning everyone on Earth into pulpy heaps of charred flesh and sinew. The Great Cthulhu was oddly silent on the subjects of marriage equality and race relations, however it can be assumed that Cthulhu’s plans to annihilate all life in the universe is on an equal opportunity basis.

Despite heavy casualties, the Cult Of Cthulhu considers the press conference a success and plans are underway for Cthulhu to embark on a national speaking tour starting with New Hampshire. Many cities in the Granite State have begun evacuating their citizens in preparation.