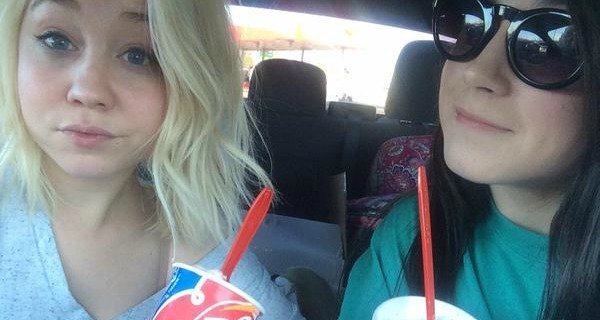 Early Friday afternoon, University of Michigan Sophomore Amy Finnerty set out with best pal and roommate Rebecca Klein to make the 14-hour drive home to Boston. Unfortunately, what started as a carefree adventure between two friends devolved into awkwardness, boredom, and tension as the day progressed.

“Our parents offered to buy us plane tickets, but neither of us had been on a road trip, and it just sounded really fun,” said Finnerty.

Spirits reportedly ran high during the first two hours of the trip, with Klein commenting that the two had “really nailed a lip sync battle of Macklemore’s ‘Downtown’” and “totally pulled a Chinese fire drill somewhere around the Ontario border.”

Finnerty recalled that the two had taken a riotous hour-one foray into a local gas station in search of junk food. “We were running through the aisles belting out the lyrics to ‘Cool for the Summer’ and the cashier was looking at us like we were completely crazy. We bought, like, nine bags of Cool Ranch Doritos. It was awesome.”

Things, however, took a turn for the worse after Klein reflected at length about her parents’ messy divorce, to which Finnerty responded, “I totally get how much that sucks because my fourth grade gymnastics coach got divorced, and the team absolutely suffered for it.” After Klein wondered aloud if that was “really the same thing,” a long silence reportedly killed the original mood of the trip.

By the time the girls passed through Syracuse, morale was palpably lower. Klein says she had exhausted her playlist options, having gone through “90s Jamz” twice, blown through “Drivinggggg,” and gotten fed up with the amount of Fetty Wap on “Maxxin Relaxxin All Cool,” sighing, “It’s just not fitting the vibe right now.”

By hour six, it had been established that Klein forgot her driver’s license in the dorm, though Finnerty was “not buying it.” Finnerty was also “a little irritated” that Klein had been asleep for the past hour, causing them to miss their exit off of I-90 East. “If she’s not gonna drive, then she could at least fucking navigate,” she said.

Despite her strong stance, she softened her message to Finnerty in the hopes of maintaining diplomacy for the remainder of the trip. “I don’t know,” she said, avoiding direct eye contact. “I’m just starting to feel like I live in this seat.”

Somewhere around Albany, both girls noted their desire for “actual food” and found that they had “weirdly started to hate all music.” Having driven the last three hours of the trip in tense silence, it is unclear if the girls will repeat their journey on the way back, or just buy a fucking plane ticket and live without a car for the rest of the semester.