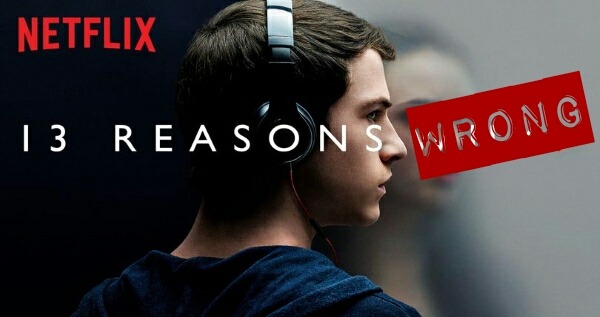 Unless you’ve been living under a rock for the last couple of months you’ve probably heard of 13 Reasons Why, the new Netflix series about a teenage girl who commits suicide after recording a bunch of cassette tapes explaining who and what caused her to kill herself. The show is thought provoking, raw…and a bunch of malarky!

I tried to kill myself once and my experience was nothing like the one Hannah Baker went through. In fact, nothing about the show is even remotely relatable if you’re a thirty-six-year-old alcoholic man! I’ve stayed sober long enough today to come up with thirteen reasons why 13 Reasons Why is bullshit when it comes to depicting the life of a suicidal overweight divorcee who’s starting to go bald. For starters…

1) When I Tried To Kill Myself, I Was Way Too Drunk To Operate A Tape Recorder.

Obviously, TV shows require a certain amount of suspension of disbelief but come on, in real life, there is no way that someone could operate a tape recorder after drinking a fifth of Southern Comfort and taking four or five Ambien.

I can’t control my bladder at that point let alone a sophisticated recording device. And even if I could get the thing turned on, I’d still be crying too hard over my wife Abigail leaving me to even tell a coherent story.

2) Tony’s Hair Is Too Perfect, My Best Friend Gino Has Hair Like A Ferret Covered In Mayonnaise.

Tony’s hair is freaking amazing and nothing at all like my friend Gino’s hair which looks like what you would get if you washed your dog with Nutella. Every time Tony was on screen with his luscious locks all I could think about was how Gino’s straggly mop of phlegm covered yarn could never be that beautiful.

3) I Don’t Personally Know Anyone Named Clay Or Bryce (In Fact I’m Not Even Sure That Those Are Real Names).

Bryce just sounds fake and Clay, that’s kind of like Playdough right? Jeez if these Hollywood people are going to invent new names why not at least make up some cool ones like Lazer Hog or Destructioneer?

4) My Parents Never Owned A Toaster Let Alone Their Own Store Like Hannah’s Parents.

On the show, Hannah’s parents own a drugstore but my parents never could because sometimes drugstores sell toasters and my mom is deathly afraid of them. I’m a bit fuzzy on the details but I guess there was some accident with a toaster when my mom was a kid and now she has no fingerprints and starts dry heaving at the sight of burnt bread.

5) We Never Had A Hot List When I Went To High School.

One thing that contributes to Hannah’s suicide is her friend Alex’s “Hot List” in which he declares that Hannah has the “best ass” at school. We never had any sort of list like that when I was in High School. Gino did tell me that I had the best grass once but that was only because he didn’t actually know any other weed dealers.

6) I’ve Never Worked At A Movie Theater Like Hannah Does.

On 13 Reasons Why Hannah has a cushy after school job at a local movie theater. I, on the other hand, sell Chinese iPhone knockoffs at the flea market. Could those jobs be any more different? It’s like Netflix doesn’t even want me to be able to personally relate to this show!

7) Hannah Didn’t Have A Restraining Order Put On Her By Her Ex-Wife.

On the show, Hannah never throws a Chinese iPhone knockoff through her ex-wife’s windshield causing the miserable witch to get a restraining order against her. In fact, Hannah doesn’t even have an ex-wife. Talk about far-fetched!

8)Everyone Is Sad That Hannah Killed Herself But When I Tried To Kill Myself Everyone Only Seemed Sad That I Didn’t Succeed.

Hannah’s suicide devastates a whole community, in fact not one character on the show expresses any sort of joy that she’s dead but when I tried to kill myself my ex-wife said she threw a party to celebrate. The tears didn’t come until she found out I was going to live.

If the producers of 13 Reasons Why wanted to create a successful compelling drama they shouldn’t have cast that clown-fuck Stephen Webber as the principal at Hannah’s school.

I ran into Webber at a restaurant once and he is the rudest asshole, he told me to go fuck myself before getting security to throw me out. Granted, I was drunk and yelling “Hey Wings, WINGS sign my wife’s tits!” much to the embarrassment of both Stephen and my soon to be ex-wife, but still, who talks to a fan like that?

How could I possibly put myself in the shoes of a protagonist that isn’t constantly eating dairy products and then paying the price for it later in the bathroom? I bet she doesn’t even keep a package of flushable wipes in her purse in case there’s an emergency.

11) Hannah’s School Is So Diverse And I’ve Never Even Seen A Real Black Person.

I mean I’ve seen them in magazines and on TV just not in real life. Not that I don’t want to or anything! I’ve just never come across one. I’ve jerked off to Beyonce so, you know I’m not racist or anything if that’s what you’re thinking.

Honestly, I have an easier time relating to The Walking Dead. At least on that show, I can see zombies with rotting skin that looks a lot like the sore on my leg that smells funny and isn’t healing right.

Thirteen reasons seems like an awful lot of reasons. I only had one reason to kill myself, that cheating whore who broke my – Oh Abby, I’m so sorry I called you that, I still love you! If you’re reading this, please take me back, I promise never to embarrass you in front of a B-list television star ever again, not even Tim Daly!

I hope that when season two rolls around Netflix will actually try to make the show more accessible for thirty-six-year-old males with severe psoriasis who attempted suicide to try and make their exes feel bad but failed thanks to their radio’s cord being too short to reach the tub.

I’m keeping my fingers crossed until then.