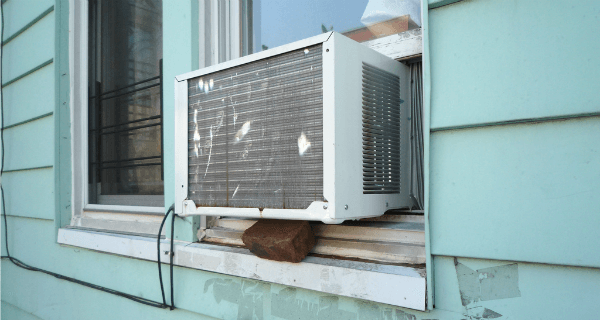 A Brooklyn, NY couple rapidly nearing the end of their relationship will continue to tough it out at least until cooler weather approaches the city.

After two mediocre years and four absolutely miserable months together, Kelly James and girlfriend Davina Bryant have decided to call it quits, as soon as it gets cool enough “not to need the AC on all the fucking time.” Barely able to stand each other’s company, the duo’s window air conditioning unit appears to be the only thing keeping the relationship together at this point.

Things have been going downhill for the pair since early spring, and after several fights and passive aggressive tactics to guilt Bryant into changing the cat’s litter box, the pair eventually conceded to the possibility that the relationship might not last.

Unfortunately, this discovery would become apparent too late, and a particularly hot summer finds them both stuck in the same apartment, and relationship, for the time being.

“It really sucks because the AC is only strong enough to cool the bedroom, so we’re stuck in kind of close quarters,” said James, 29, from the bottom right corner of the couple’s shared full size mattress.

Unable to reach a decision determining who would end up with the $140 air conditioning unit, the couple everyone refuses to join for brunch anymore finds themselves in a stalemate and will likely remain there until September at the earliest.

“I’m not going anywhere,” said James. “Maybe it’s not the ‘right’ thing to do, but have you been outside? I can’t even breathe out there.”

“Plus, we live on a sixth floor walk-up,” Bryant, 31, stated, from just to the left of the dirty clothes hamper. “I’m not about to carry this heavy ass air conditioner down all those stairs just to wrestle it into an Uber.”

Despite an end quite clearly in sight, the couple has faith that their arrangement will work out for the best.

When asked what the couple plans to do with the cat, both women offered to take it only if the other one didn’t want it.