Alabama Man Fights For the Right To Marry His AR-15 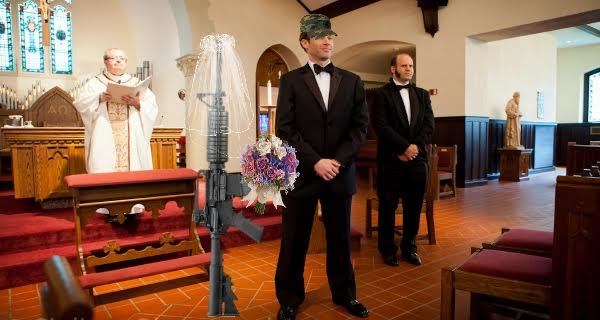 With mass shootings quickly becoming a regular occurrence in America with more legislators pushing for stricter gun laws, gun owners everywhere are fearing for their right to bare arms. Alabama native and self-described “ammosexual” Frederick Gunt, however, has come up with a novel idea to keep the government from taking his guns: marriage.

Gunt intends to enter into a blessed and legally binding union with an AR-15 semi-automatic rifle that he’s affectionately nicknamed “Ayar” in hopes of making the gun a citizen, with all of the rights and privileges thereof.

“If a man can marry a man now, than a man should be able to marry a gun too.” argues Gunt, “If I get hitched to ol’ Ayar here, she’ll be a legal citizen of the US of A and Obummer can’t take her away from me, no matter what new laws they pass!”

Several people have tried to explain to Gunt the difference between two consenting adults of the same sex getting married and a man marrying an inanimate metal death-tube, but according to Gunt “they’re wasting their word-air.”

“I’m an American,” Gunt proclaims proudly. “I have a right to be as ignorant as I want on any subject — be it immigration, abortion, or even the second amendment – no matter how illogical or unreasonable my position is, and right now my position is that I should be allowed to marry my AR-15 rifle.”

Unfortunately for Gunt, the clerks at the Mobile City Hall don’t share his enthusiasm for human/firearm love affairs. “They glock-blocked me down at the City Hall,” says an exasperated Gunt, “they said they wouldn’t give me a marriage license because marrying a rifle is ’asinine’ , but I think it’s really because they’re a bunch of Ammophobic bigots.”

Not one to give up easily, Gunt is prepared to fight for his right to marry Ayar and intends to take his case to court if need be. “I come from the land of frivolous lawsuits” declares Gunt proudly, “if a woman can sue for her hot coffee being too hot, I can sure as hell sue for the right to marry my bulletslut!”

In the meantime, Gunt says he has every intention of consummating his relationship with his AR-15, marriage or not. “Every time I look into her telescoping stock while gently caressing her pistol grip, I get butterflies in my stomach and a fat ol’ boner in my pants. We may not be able to get properly married yet but if O-blow-me wants to take my gun away, he’s going to have to pry it off my cold, dead, dick.”