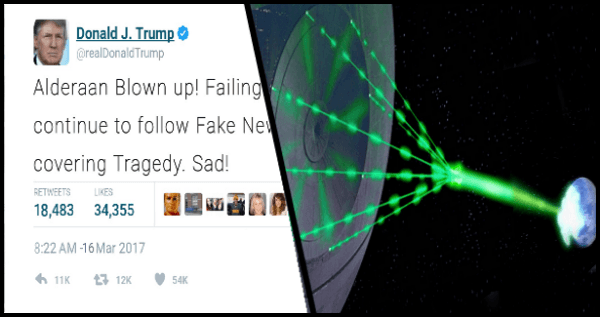 President Trump sent out a tweet this morning imploring the mainstream media to cover the recent destruction of Alderaan instead of pursuing what he calls “Fake News Russia.” 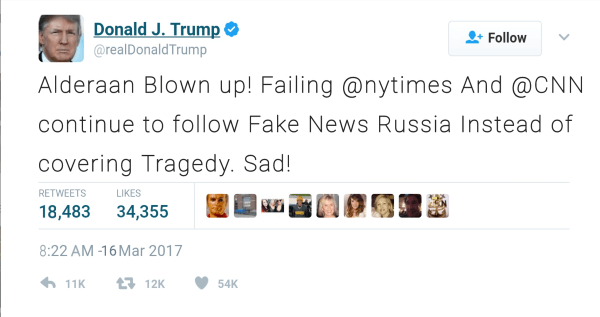 The tweet came the morning after TBS aired a Star Wars marathon, a fact that representatives from the White House were quick to call a coincidence and nothing more.

“Who cares where the President heard about the terror attack?” asked Kellyanne Conway during an appearance this morning on Fox and Friends. “The real question is why aren’t CNN and the New York Times writing about it? Alderaan was a peaceful planet, they had no weapons! This was a loss of innocent life on a scale we’ve never witnessed before, it was as if millions of voices suddenly cried out in terror and were suddenly silenced!”

The tweet is just the latest in a long line of inflammatory statements made by the president based on something he saw on TV the night before. “It’s one thing to tweet about Sweden having a refugee problem the day after Tucker Carlson talks about it on Fox News,” said CNN’s Jake Tapper in response to the Alderaan tweet. “But come on, how could he not know that Star Wars wasn’t real? He can’t be that stupid can he?”

Unfortunately, the Alderaan tweet is far from an isolated incident. Several anonymous staffers have come forward since this morning’s tweet with similar stories. “Last week the president was watching Raiders Of The Lost Ark,” said a source who wishes to remain anonymous, “and it took four aides to convince him that the Germans didn’t have a box that could melt people’s faces. He was ready to send out a tweet condemning Angela Merkel for testing a weapon of mass destruction in Egypt, thank god we caught him in time!”

It was also revealed that President Trump called Charlie Baker, governor of Massachusetts, two days ago to offer his condolences over the recent shark attacks that were plaguing Amity island. “He actually offered to give ‘Chief Brody’ a citation for bravery! I had to stuff my tie in my mouth just so he wouldn’t hear me laughing,” Baker said.

The Trump administration is taking its usual stance of doubling down on the president’s words. “There’s like a billion, bajillion planets in space – can anyone prove that one of them wasn’t blown up last night?” asked a particularly ornery Sean Spicer during a press briefing earlier today. “No? I didn’t think so.”

Those afraid that the president would make it through the whole ordeal without trying to blame everything on Hillary Clinton somehow, were able to breathe a sigh of relief when President Trump sent out another tweet alleging that Clinton was behind the whole thing. 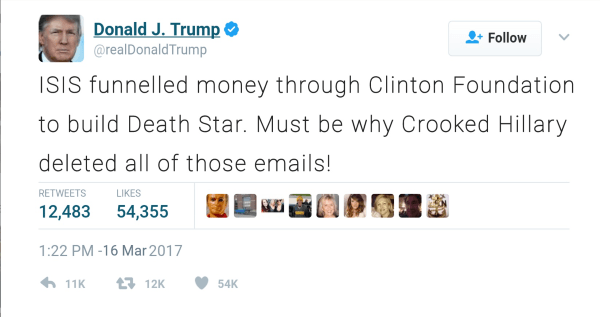 “ISIS funnelled money through Clinton Foundation to build Death Star. Must be why Crooked Hillary deleted all of those emails!”

So far representatives from the Clinton Foundation have refused to comment on the accusations, although Hillary herself did respond with a tweet of her own: 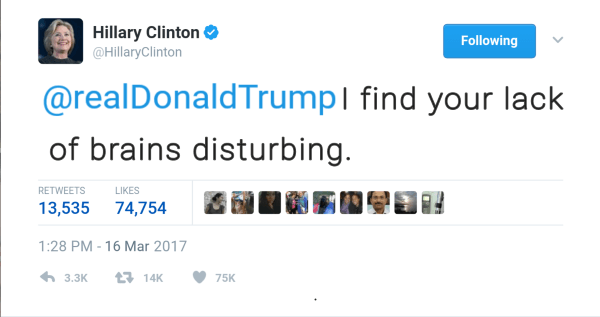 “@realDonaldTrump I find your lack of brains disturbing”