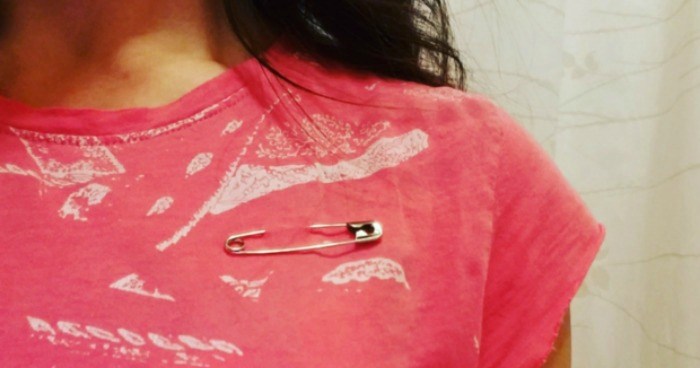 In the wake of president elect Donald Trump’s recent upset, minority groups are expressing fear and trepidation about living under the control of a man who has consistently spewed racist, homophobic, sexist, xenophobic rhetoric.

When asked how he felt about heroically solving something so deeply rooted in the American ethos, the safety pin only said, “I’m not a hero; the real heroes here are the white people who are brave enough to wear me out in public.”

The safety pin – meant to inform other people in homogeneously liberal environments that the person wearing it is a true ally to disenfranchised minorities – has become a symbol of shocking courage to the people pinning it to themselves.

He continued, “Allies could be focusing their time, money and energy on donating to places like the ACLU or the Southern Poverty Law Center, or they could be attending Black Lives Matter rallies or volunteering for Planned Parenthood. But instead, they are posting pictures of me on Instagram, and that…that is truly where progress begins. And ends.”

The safety pin answered questions regarding why he feels his movement has taken off so quickly, saying “Unfortunately, your Facebook friends can’t physically see you arguing with your aunt at Thanksgiving about her homophobic opinions. What they can see is a shiny, grade-A, impractically large safety pin front and center on your thrift shop flannel.”

“I can’t take all the credit for this movement,” said the safety pin, “Others like my good friends the Ice Bucket and the pushup have certainly come before me.”

When asked what his long term plans were to combat the rising tide of racism and Islamophobia, the safety pin courageously stated, “….No, I mean…no, this is the whole thing.”