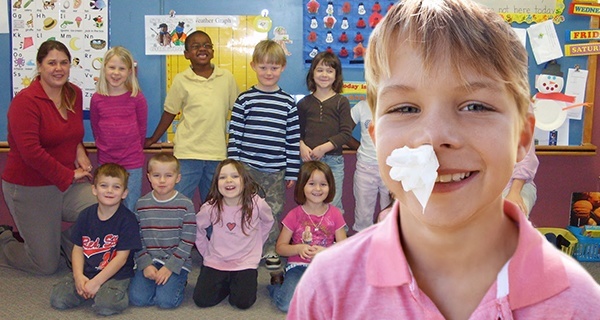 The stickiest child in Mrs. DiPietro’s kindergarten class announced today that he plans on having this cold for “at least the next seven months.”

Stevie Fichera, 6, made the long awaited announcement this past Wednesday afternoon, after building a sandcastle on the playground and subsequently eating the frosting from a Dunkaroos package with his fingers. He reportedly did not wash his hands in between.

“I’m excited to be able to tell you that my nose will be in perpetual state of drippiness through kindergarten graduation, and potentially stretching all the way into first grade,” said Mr. Fichera in his speech to the rest of the class after Show-And-Tell last week.

He went on to say, “I’ve spent countless hours perfecting the art of wiping my face on my shirt, and I’m proud to announce that it’s all paid off.” Fichera, who improbably always has ketchup stains on his clothing by 10AM despite coming to school clean and consuming no food with ketchup on it, has voiced his intention to keep this hacking, wet cough well into the summer months.

“What really makes Stevie unique is his ability to sneeze into your face with no warning,” said fellow classmate Maya Hernandez. “You just have to admire it.” Classmates also applaud Fichera for his ability to keep an open wound for weeks at a time by picking and eating bits of the scab.

Mrs. DiPietro spoke fondly of her student, saying, “Stevie has managed to maintain a fine, even crust between his nose and chin for at least half the year. He’s totally devoted himself to breathing loudly through his mouth, often times directly into yours.”

As for Stevie himself, the young sickling has big plans for the future. “My dream is to keep an endless trail of green snot running down my face well into third grade,” he said. “I’m a pragmatist though – if I can make it through second grade with just an ever present, mysterious streak of dirt on my neck, I’ll consider myself a success.”