Church And State Cozy Up At New York Knicks Game 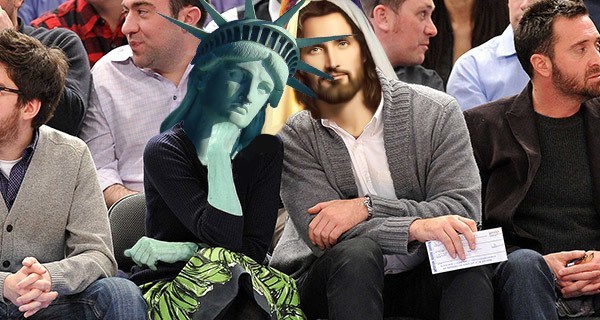 The rumors are true! Yesterday, the church and the state were spotted sitting courtside at a New York Knicks game. After centuries of claiming they’d never been involved, it appears the couple is finally letting their hair down.

The pair looked intimate as the church, 2015, put his arm around the state, 239, and she whispered into his ear. Not only were they spotted holding hands, but at one point the religious powerhouse pulled his constitutional cutie in for a kiss on the lips. Are they the cutest, or what?

The state, who is currently battling the hectic schedule of the upcoming presidential election, immigration crisis, and nationwide Second Amendment divide, looked relieved to be relaxing with her main squeeze. Meanwhile, the church, who’s amping up for Christmas, couldn’t help but cast flirty looks her way throughout the game.

However, not everyone’s happy about the power couple’s relationship. “People were so against it at first,” the civil stunner recently said of criticism that their relationship is inappropriate. “But it’s my life, my decision, and I just really want to have fun right now.”

“Age is just a number,” said the ecclesiastical trendsetter of the almost two-millennium age difference. “We share so many similarities. We’re both widely outdated belief systems, so we know what it’s like to deal with people misinterpreting you all the time. Plus, we both love to cook.”

On September 25, the two were spotted lip-locking at a Taylor Swift concert, but claimed it was just a goofy joke. But with their recent canoodling, things have certainly come along way. Some say the dynamic duo may even tie the knot soon, though both declined to comment.

“The state loves how deep the church is,” said one source. “They really get each other.”