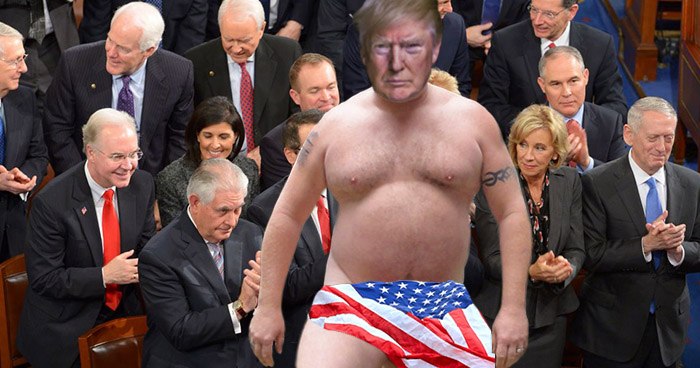 White House officials are still refusing to acknowledge what some are calling “the gaff of the century” as President Trump continues to conduct business in total nudity. The grisly scene began last week, sources say, when two tailors approached the most powerful man in the world with a hi-tech bespoke suit that “only the very best people can see.”

“Yes it truly is a great suit, the best, it looks great,” said the naked President, trying on the suit for the first time. “It’s made from the finest fibers. We’re talking stitched out of animals that you didn’t even know existed. Incredible.” Trump followed up his initial reaction to the outfit by forcing Chief of Staff John Kelly to describe the suit to him in detail, “you know, to make sure you can see it too, John.”

The White House Communications staff maintain that the suit is real. At a recent press briefing, Press Secretary Sarah Huckabee Sanders stated, “The suit, which only great people can see, is very nice. The President would like to say that he feels bad for you if you cannot see it. It is real and very, very good.”

At the conference, CNN correspondent Jim Acosta suggested the President did not have a magical suit and was in fact not wearing any clothes at all. He was forcibly removed by Secret Service and tazed multiple times in full view of the remaining White House correspondents.

“It’s unfair and biased for the media to claim the President does not have any clothes on,” said Vice President Mike Pence, visibly sweaty, in an interview with Meet The Press. “As you’ve seen, I’ve been staring at his… great belt… all day. What a man.”

Though the response to his fully visible body has been mixed, Trump himself is still positive about the allegedly visible menswear, tweeting, “My ratings up 200% since suit! Do not believe FAKE news media. Suit is REAL. Sorry if cannot see!!”

At press time, Trump’s campaign has already begun selling hats made of the same material to finance the naked commander-in-chiefs 2020 reelection bid.