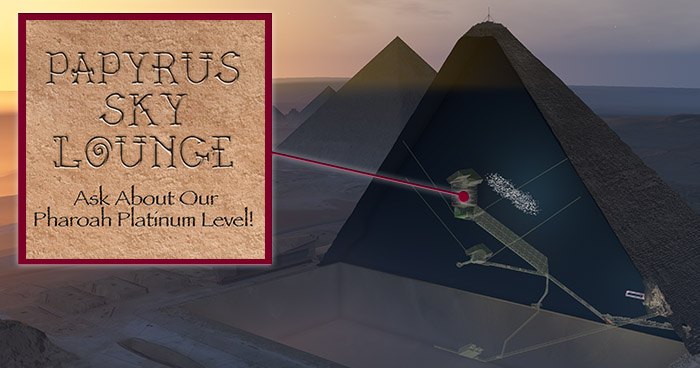 At almost 5,000 years old, the Great Pyramids of Giza are one of the most ancient and iconic structures in the world. This week, the pyramid revealed yet another secret to a shocked world: a hidden chamber deep inside the Pyramid of Khufu that archaeologists now think acted as a ‘Delta Sky Club Lounge’ of sorts.

Using cosmic rays, scientists discovered the compartment deep in the heart of the pyramid and – after careful analysis – were able to deduce it was most likely an early archetype of the modern, exclusive areas at airports reserved for customers who wish to relish in a luxurious and refined relaxation experience between flights.

“We can say with near certainty that this massive alcove was meant for one thing and one thing only: to be used by viziers and nobles to take a brief reprieve from the hustle-and-bustle of trekking through ancient Egypt by boat, litter, or chariot,” said lead researcher Mehdi Tayoub.

3D scans of the room yielded all the elements typical of airline rewards lounges, but with an ancient-Egyptian flair: hieroglyph-engraved tablet menus featuring breads, meats, and seasonal fruits; a fully stocked imbibing zone offering a selection of ales and spirits; travel assistance from godly priests; an entertainment area with half a set of checkers, dice, knuckle-bones and senet; complimentary scribe access for those needing to search the expanse of human knowledge; and, of course, hot towels.

Iconography behind the main receptionist table outlined the terms of service as well as membership tiers, such as the basic Artisan Membership for 3 rations of grain and 1 ration of meat per month, all the way up to Pharoah Membership, for 12 rations of grain and 4 rations of meat per month. The highest membership level also appeared to include perks such as “2 free slave passes per visit” and “unlimited Sphinx Tomb Lounge access in the afterlife.”

Tayoub’s team says it’s still unclear if the ancient Sky Lounge equivalent also included sobbing children, cheese platters that sit out for two consecutive days, giant chairs lacking any discernible Lumbar support, and bowls of mints which have melted together. They are, however, hopeful that extended archaeological research will yield definitive answers.

As of press time, Tayoub was excited to report he and his team had discovered yet another artifact inside: a preserved mail-order papyrus scroll featuring a plethora of unconventional items for purchase, roughly translated to ‘Horus Mall.’