Trump On Putin, Duterte, Hussein: “I Guess I Have a Bad Boy Thing” 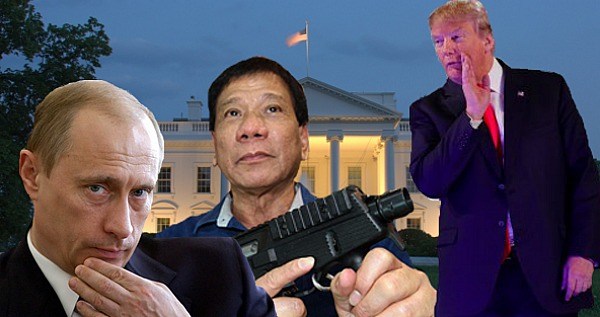 During a recent Sunday morning brunch at a Washington D.C. cafe, Kellyanne Conway and Sarah Huckabee-Sanders left President Trump speechless after suggesting that he might have a thing for “bad boys,” according to multiple eye-witness accounts.

“Donnie, listen to the way you talk about Putin and you couldn’t wait to invite Miguel Duterte to the White House! You even defended Hussein a little bit last year,” Conway was overheard saying while sipping a mimosa. “Girl, you have a bad boy thing!”

“He sooooo has a bad boy thing,” Huckabee-Sanders added.

The two women went on to point out that even during his time as a New York City real estate mogul, Trump had an apparent fondness for ruthless attorney/monster Roy Cohn, as well as a slight admiration for real estate heir and famed murderer Robert Durst, according to cafe patrons seated two booths over.

“That is soooo not the same,” an embarrassed Trump reportedly exclaimed. “Look, Miguel [Duterte] is just … he’s really interesting. I just think it’s so cool how he cracked down on his country’s drug problem by creating an air of intense fear.”

“Listen to you!” said Conway. “‘Miguel.’ You guys are on a first name basis now?”

A cafe employee confirms witnessing Trump then playfully tell Conway to “shut up” before checking a Facebook message on his smartphone, prompting Huckabee-Sanders and Conway to ask in a teasing manner if Putin was the one who sent the message.

“Mayyyybe…,” said the President, causing all three to burst into laughter before ordering another round of mimosas.