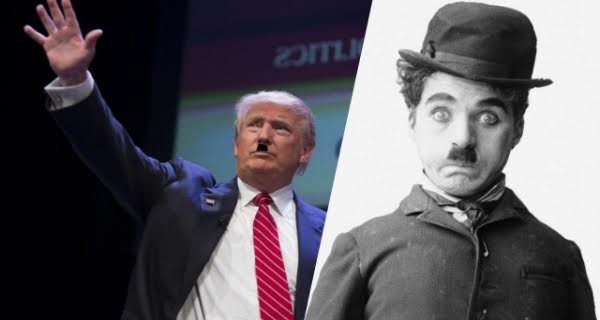 For years, Donald Trump’s only defining physical characteristics have been hands small enough to fit into Polly’s Pocket and the small animal carcass that adorns his head, but now you can add facial hair to that list.

The historically clean-shaven Trump has recently been seen sporting a black rectangular moustache roughly the size of a postage stamp above his lip, and Republicans and Democrats alike aren’t happy about it.

“It’s one thing to act like Hitler,” said Republican Speaker of the House Paul Ryan, “I mean, we are Republicans. But actually trying to look like a genocidal maniac? That’s a little too on the nose.”

Trump of course vehemently denies that the moustache is in any way meant to look Hitleresque and insists instead that it’s actually a tribute to Charlie Chaplin.

“Why do I have to get involved with Hitler? I have nothing to do with Hitler,” insisted Trump, “I’ve never spoken to him and I don’t know anything about him. No, I grew this moustache because I’m a yuuuuuuge Charlie Chaplin fan, yuge. He’s the Tramp and I’m the Trump, it’s a perfect match.”

Trump tried to further defend his new soup strainer yesterday by tweeting: “I love Chaplin. He made the Great Dictator and I’m going to make America Great!” Unfortunately for Trump, the tweet was accompanied by a picture of the billionaire holding a DVD of the 1926 Buster Keaton film The General which has led many to question whether Trump even knows who Charlie Chaplin is.

Earlier today a spokesman for Donald Trump tried to do some damage control by claiming that the picture was supposed to be a joke and that Donald Trump ‘absolutely knows who Charlie Chaplin is’ before adding without any prompting, “And he’s still not releasing his tax returns, so stop fucking asking!”