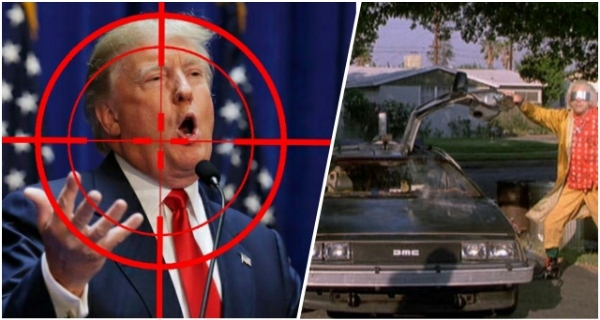 Move over Hitler, there’s a new target for hypothetical time-travel assassination and he’s more The Apprentice than Der Fuhrer. A recent RealClearPolitics poll shows that Donald Trump has surpassed Hitler as the person most Americans would go back in time to kill if they had access to a time machine.

49% of those polled said that they would go back in time to 1946 and take out an infant Trump, with 37% choosing the more traditional crib-side snuffing of baby Hitler. Surprisingly, the person voted 3rd most worthy of time-murder wasn’t a dictator or corrupt political figure but rather Star Wars director George Lucas. 10% of those polled would travel back to put a hit on Lucas in 1996 preventing him from ever starting production on The Phantom Menace. The remaining 4% said they would not kill anyone.

This poll comes as Donald Trump’s presidential campaign continues to steamroll his opposition, and more and more people fear that a Trump presidency could usher in the 4th Reich.

“If you look at Hitler’s rise to power and compare it to what Trump is doing right now, you see some scary similarities,” said Glenn Marston, a Political Science Major at Amherst College in Massachusetts. “I’m a pacifist but I mean, if Doc Brown showed up at my dorm tomorrow and said ‘Get in, we have go back and kill Donald Trump before he tweets us into World War 3!’ I’d grab a gun and jump into that DeLorean faster than Michael J. Fox.”

Still, some say that comparing Trump to Hitler is giving too much credit to Trump.

“Why would you waste a bullet, when Trump is imploding before our very eyes?” asked Starbucks barista Sharon Wright. “The guy won’t even be able to get his wall built, let alone personally orchestrate the attempted genocide of a whole ethnic/religious group. He’s a putz!”

RealClearPolitics founder John McIntyre agrees: “Trump is just the flavor of the week. Sure, everyone wants to kill him now, but I have full confidence that when he loses the race and fades back into relative obscurity, people will go right back to daydreaming about stealing a TARDIS and teabagging Hitler’s corpse.”

Meanwhile, Donald Trump himself seemed unfazed by the results of the poll and chalks them up to poller bias. “RealClearPolitics probably polled a lot of broads with blood coming out of their wherevers, plus Mexicans – it’s a fact that when not raping or murdering, most hispanics participate in online polls. If they’d done their job right, there’d be no question that I’m WAY ahead of Hitler. Donald Trump isn’t a loser in anything – not even time traveling death threats.”