Emperor Palpatine Objects To Removal Of Sith Statues Around Galaxy 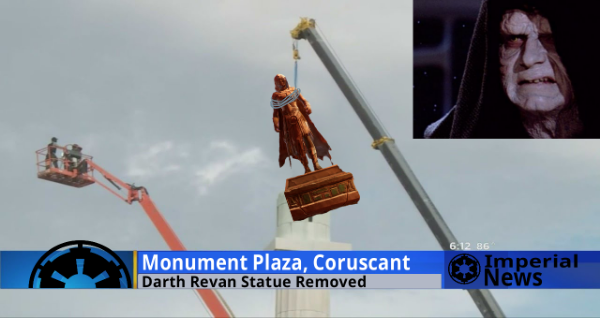 Emperor Palpatine held a press conference yesterday to talk about infrastructure but ended up giving his opinion on the recent removal of Sith monuments instead.

In the wake of last year’s tragedy at the Jedi Temple when fallen Jedi-turned-Sith-Lord, Anakin Skywalker murdered several younglings in the name of the Dark Side, many worlds have decided to take down their remaining Sith statues, often in the middle of the night to avoid any confrontations with Sith Acolytes or Dark Side Adepts.

The Emperor expressed his strong objection to these removals, claiming that, “The beauty that is being taken out of our great Empire will be greatly missed,” and that it could never be “comparably replaced.”

“We can’t erase the rich history of the Sith Order,” said the Emperor. “First it’s statues of actual Sith Lords like Darth Bane and Exar Kun but where does it stop? What about Bail Organa of Alderaan, he adopted the daughter of a Sith Lord, are we going to take down his statues? What about Queen Amidala of Naboo who married a Sith? Do we get rid of her too?”

The Emperor — who had been expected to talk about the construction of the new Death Star military base — went on to address the criticism that he didn’t do enough to denounce the Separatists recently when he said that there were “very fine people on both sides of the Clone Wars.”

“I didn’t know Count Dooku was there,” Palpatine explained. “I wanted to see the facts.”

“All I keep hearing about is the dark side,” The Emperor added. “What about the light side that came charging at the, as you say, ‘dark side’? Do they have no semblance of guilt?”

When asked to specify which members of the Dark Jedi lead Separatists were “very fine people” the Emperor lashed out.

“Look, the Jedi are the real bad guys, OK?,” snarled Palpatine. “You know, they show up with their robes and their lightsabers, and they’ve got that Jedi mind trick, just nasty stuff.”

The Emperor also confirmed the rumors that some of the workers removing the Sith monuments have been turning up dead — seemingly by electrocution — when he admitted that he was the one killing them.

“Guys, this isn’t a democracy,” Palpatine cackled as arcs of purple lightning shot from his fingers and into a reporter for the Coruscant News Network. “I’m an evil dictator, I can do anything I want! My next in command is literally a friggin Sith Lord, of course I’m a dark side sympathizer!”

Emperor Palpatine concluded the press conference by reaffirming his intention to build a wall around the galaxy and have the Yuuzhan Vong pay for it before releasing a battalion of stormtroopers into the room and having the entire Imperial press corps executed.