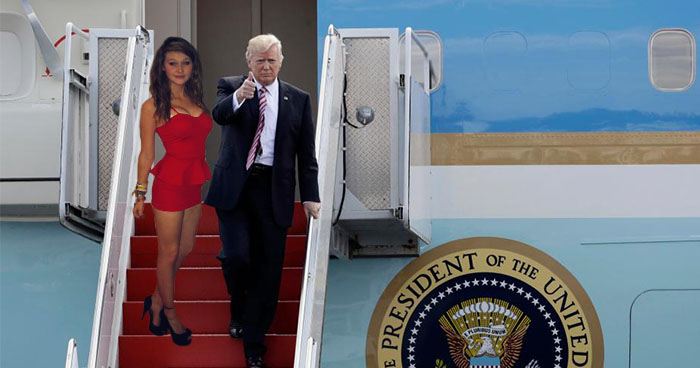 Before returning home from Europe following his first trip abroad as President of the United States, Donald Trump picked up some souvenirs for his grandchildren and a new wife for himself. Between purchasing designer coats in Rome that won’t fit because he knows nothing about his grandchildren’s sizes and has no interest in learning, and fancy chocolates in Brussels that a child would take one bite of before demanding french fries, Trump swung by Croatia and picked up a 31-year-old model named Ana Novak to be his fourth wife.

The President showed great pride in his choice for future First Lady, tweeting “Finally traded in the old model. Long overdue!”, “Croatia has a lot of stuff. The best stuff. Not like Slovenia. Losers!” and “Wives are the only area where I don’t buy American!”

Sean Spicer immediately held a press conference to clarify Trump’s remarks. “The President believes that Ms. Novak will make an excellent addition to his administration,” he said. “She’s not only beautiful but well educated. She has a degree in marine biology, which greatly impressed him once we explained what a marine biologist does.”

The public expressed mixed feelings about the upcoming nuptials. “I sort of think Trump should have given the job to an American, but have you seen American women lately?” said Richard Bellman of Champagne, Illinois. “It’s called salad, fatties. Google it!”

“It will be so nice to have a First Lady who actually lives in the White house,” said Natalie Roberts of Miami. “She will be living at the White House, right? My taxes won’t be paying to guard some penthouse in Dubrovnik, will they?”

Melania Trump will train her replacement until the wedding, which will be held on September 18 at Mar-a-Lago. Afterwards she will receive a generous severance package and a wealthy Italian businessman to date of equal or greater value than Trump, as stipulated in her contract.