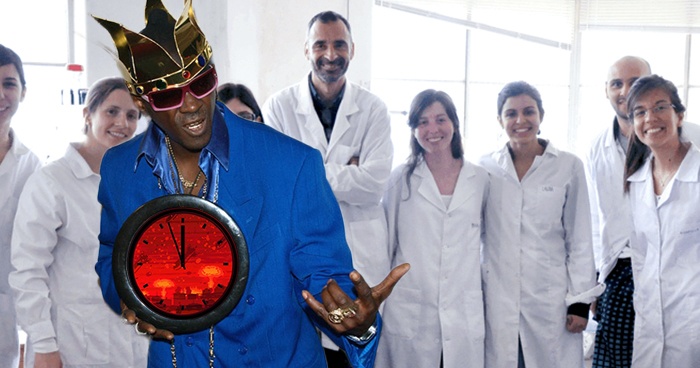 A representative from the Bulletin of the Atomic Scientists’ Science and Security Board confirmed this morning that The Doomsday Clock rapper Flavor Flav wears around his neck has been set one minute closer to midnight. The board’s panel of experts approved adjusting the clock to reflect the growing threat of possible nuclear war between North Korea and the United States.

“Based on recent geopolitical events and the data we have on hand, we had no choice but to move that minute hand,” atomic scientist Thor Hawthorne said. “When we showed our findings to Mr. Flav, he signaled his agreement by shouting ‘yeaaaaaaa, boiiiiiiiee.’ No one is a greater expert on the subject of imminent nuclear annihilation than Flavor Flav.”

Since the late ’80s, the rapper has held the great burden of being the carrier of The Doomsday Clock. It’s a responsibility he takes with the utmost seriousness, according to those closest to the rapper.

“Flav never took that clock off, not once,” said Bomb Squad member Hank Shocklee. “It could be a real problem. We had to re-record “Cold Lampin’ With Flavor” three times because the mics kept picking up all that damn ticking.”

“And when we asked him to take it off, all hell broke loose,” chimed in fellow Bomb Squad producer Keith Shocklee. “He just started shouting at us about mutually assured destruction and how our bootyholes would get fallout poisoning.”

Being a walking symbol of mankind’s impending doom hasn’t been easy for the veteran rapper.

“Lot of people, they don’t see me, they see nuclear winter,” Flavor Flav revealed in an interview with The Journal of Atomic Science. “I’m trying to spit some hotness about putting my mother lovebone in their fondue pot, G. But they don’t hear me – they’re too busy thinking about eating the irradiated flesh of their loved ones.”

When asked if he thought his estranged partner would ever take off The Doomsday Clock, rapper Chuck D expressed his doubts.

“Flav is married to that clock, cradle to the grave,” Chuck D said. “He still sends me texts about how close we are to midnight – look, he sent me one just now. ‘A yo, Chuck – we’re 60 seconds away from getting vaporized into atomic dust, G. Believe the hype.’”