That’s So Millennial! Couple Throws Gender Reveal Party For Themselves 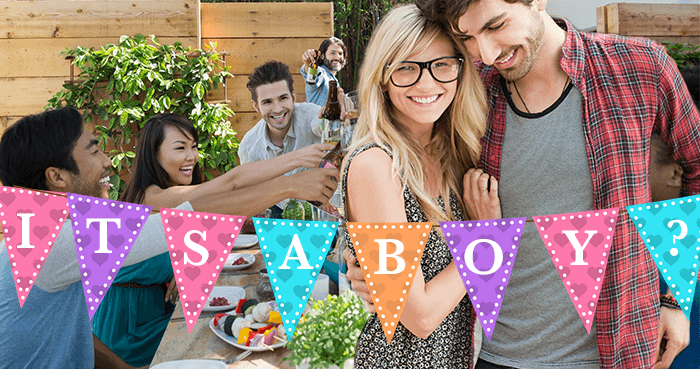 Long term couple Jamie and Casey Walsh’s apartment in Cambridge, MA, was abuzz Sunday as friends and family gathered for the newest trend in celebrations – the Walsh’s Gender Reveal Party.

“We thought it would be a fun way to bring our loved ones together and share this special time of discovery,” said Casey Walsh. However taking a slight departure from the fad of revealing the gender of one’s baby-to-be, the Walsh’s are taking it a step further, revealing their own gender identities, instead! “I couldn’t wait to find out what I was,” gushed Casey.

The Walsh’s prepared for the party by scheduling an appointment with their doctor, James Wren, Ph.D, to verify their given genders. They then followed suit by each writing their preferred gender identities on separate slips of paper, to see if they matched at the big unveiling. For their part, the Walsh’s swear they didn’t peek ahead of time.

“I thought it was pretty obvious,” said Dr.Wren, who admitted to being confused by the Walsh’s visit. “But hey, I’ll take the check.”

Party-goers were asked to fill out a Venn diagram as to what they thought the couple’s genders could be. While Jamie was hoping to be a boy, Casey didn’t care as long as he/she was healthy.

“You can usually tell,” said Casey’s best friend, Hayden Brown. “They say if you’re carrying low, then you’re probably a boy. But if you’re thicker through the hips, you’re usually a girl. I’ve also heard that if you tie a ring and dangle it above your belly you can tell your gender by which way it sways. If the ring hits your breasts, then you’re a girl, but if it doesn’t hit anything, you’re probably not.”

After passing around appetizers with gender-neutral themes like “Non-binary granola clusters” and cocktails called “Gender Fluid,” it was time for the moment of truth. Jamie opened a cardboard box to see blue balloons emerge, at which party-goers were elated. There was a bit more confusion when Casey’s box contained only glitter, but a Google search revealed it meant “pangender,” much to everyone’s relief.

Some partygoers were reportedly confused, as Casey is, in fact, currently pregnant, mistaking the baby for the subject of the party. Casey laughed it off, however, stating “There is no way the baby is old enough to decide its gender yet.”

When reached for comment in the corner of the dining room, Hank Walsh, a retired Boston police detective and Casey’s father, simply muttered into a vodka tonic that he should’ve never let his kid go to Sarah Lawrence.