Eternian Judge Rejects Sorceress’s Request For Grayskull Recount, “Skeletor Won, Get Over it!” 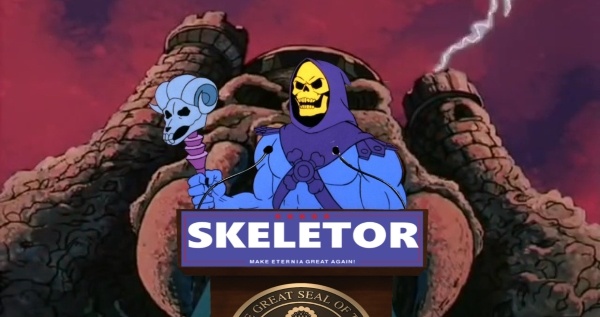 The Eternian Supreme Court on Friday denied The Sorceress’ request for a recount of the recent Grayskull election, meaning ruler-elect Skeletor’s victory over the forces of good still stands.

“The election is over,” said judge Yur-Hon-Or in regards to the recount. “Skeletor won and the Masters Of The Universe need to get over it!”

The call for a recount comes hot on the heels of new intelligence that suggests that the planet Etheria may have interfered with the election, an allegation that Hordak – leader of the Evil Horde, Etheria’s ruling party – firmly denies.

“Why would I help Skeletor take over Eternia?” asked Hordak with an evil smile. “I plan on taking it over myself eventually!”

Skeletor himself also denies any involvement from Etheria, even going as far as projecting a giant hologram of his head into the sky above Eternia at 3 am and saying as much.

“These allegations are ridiculous!” shouted the giant Skull in a voice loud enough to be heard by every Eternian living or dead. “Skeletor doesn’t need help from Hordak to defeat that nasty Sorceress and her bumbling champion He-Man! Skeletor can beat them his damn self!”

The Sorceress and the other Masters Of The Universe, on the other hand, believe that Etheria did indeed play a role in the recent election.

“Our intelligence – namely Buzz-Off, our heroic spy in the sky – witnessed a portal of indeterminate energy appear suddenly over Skeletor’s Snake Mountain just before the election,” said the Sorceress, “And through the portal flew scores of what appeared to be Horde Troopers. Later that day, several of the people that showed up to the polls were accompanied by the very same Horde Troopers who glared at them menacingly the whole time they were voting. Next thing you know, Skeletor wins the election? That doesn’t seem like a coincidence to me.”

He-Man, protector of Castle Grayskull and Skeletor’s mortal enemy, put it more bluntly, saying, “Skeletor is nothing but Hordak’s puppet.”

Despite the overwhelming evidence obtained by Buzz-Off, and heroic human periscope Mekaneck pointing to Etheria’s role in getting Skeletor elected, Yur-Hon-Or remains unconvinced that any Election tampering took place. The Judge also vehemently denies being under the influence of a mind-control spell cast by Skeletor’s right-hand witch Evil-Lyn despite the odd glow coming from his eyes and the stilted manner of his speech as of late.

“Skeletor won in a landslide victory, the likes of which have never been seen on Eternia. A recount couldn’t possibly find enough votes for the Sorceress to change that!” Said the master of heroic justice and gavel swinging action. “Besides, do you know how hard a recount by hand would be? It would take forever to count all of those Horde Troo – I mean those perfectly legal votes by legal citizens of Eternia.”

He-Man, however, refuses to give up his fight against the evil Skeletor regardless of election results.

“Skeletor is not my fascist emperor,” Said the most powerful man in the universe. “The Eternian Supreme Court may have denied us a recount for now but I HAVE THE POWER….to file an appeal!”