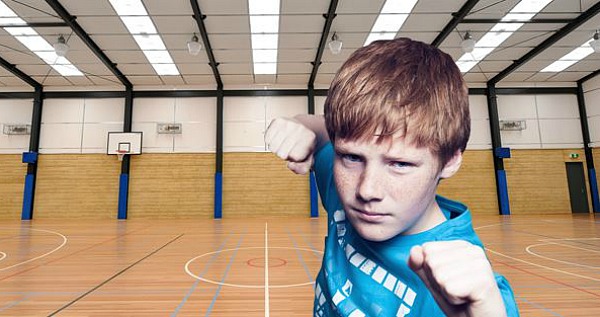 While most of his fellow 6th-grade classmates expressed disappointment in having to return to Joe Piscopo Elementary School earlier this fall, school bully Ernest “Ernie” Dubrow is thrilled to be back in class. A longtime tormentor of all students grades 3-6, Dubrow is eager to test out new material that he had been “woodshedding” this past summer.

“He’s been on fire, creatively,” reported fellow bully Stan Gasherman. “He tried out his tight-five put-downs at some food court dweebs last weekend and it slayed, man. Dude’s game is on a whole other level now.”

Dubrow credits the tightness and originality of his new material to his time spent working the family circuit.

“Ernie is always bouncing his jokes off of us,” said aunt Geraldine Dubrow. “It doesn’t matter if we’re at cookouts, pool parties, or post-church brunches – Ernie’s always got a delightful joke about booger-eaters and big Jew noses to lighten the mood.”

The middle school bully has also been road-testing his material at local drive-throughs.

“He asked me if dicks were on the menu since it looks like I eat so many of them,” said Burger King employee Stacy Haverford. “It was kind of a hack joke, really. I’ve heard better slut jokes from Tommy Wesson over at Martin Van Buren Middle School.”

After months of honing his new work, Dubrow is ready to “get some time at legit spots” like the east wing hallway, the second-floor boy’s bathroom, and the gymnasium.

“It doesn’t matter how good a fat joke is on paper,” Dubrow said to school reporter Sammy Weiss, minutes before stuffing him into a locker. “If it can’t make the greaseballs in gym class laugh, it’s not worth wiping my ass with. Or yours, either, you slimy pimple-popper.”