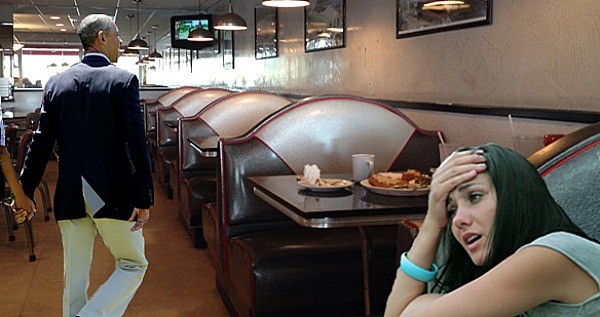 A heartbroken and shocked America was in tears at a Washington D.C. diner earlier this week after witnessing former President Barack Obama seated at a booth with a younger, hotter nation, according to sources.

“It was really, really pretty,” a despondent America recalled. “It looked, like, Mediterranean, I guess? Maybe a little Middle-Eastern, or Asian? I don’t know, just very exotic, and so bubbly and youthful. I know I should be happy for him, but, ugh, I just wish I hadn’t seen that. I wasn’t ready for it at all.”

America went on to point out that although the ex-president wasn’t perfect, he still left a lasting impression on it.

“Yes, there were things about Barack that I couldn’t get behind,” America said. “Like, he was always playing with his damn drones, and he didn’t exactly click with my kids in the Midwest and the South. Plus, when we went out he always had to pick the movie. But all in all, he made me feel really special.”

“He could be so amazing,” America added, staring longingly at its empty wine glass. “Ugh, come on, America, get it together. It’s been seven months!”

The young country then made a quick transition into the “bargaining” stage of grief in an apparent attempt to reason with itself.

“You have to understand, I was with the same type of guy for soooo long, and when he came around, it was like a whole new world,” it continued. “I felt so much more adventurous and new. I mean, I almost had my first encounter with a woman last November! Had it not been for Barry, I would have never been so open to these new experiences.”

Although clearly not over its former Commander in Chief, America has since attempted to move on as well.

“The new guy, he’s — I don’t know, he’s whatever,” said a visibly upset America. “He’s not the best looking, and he’s not the most charismatic, but he can take care of me, I guess? He can offer me security. Right? Oh God, I think I may have made a huge mistake.”

According to diner waitress Doreen Smith, America was spotted by Obama despite attempting to hide its face with an oversized menu, prompting him to stop as he walked out with the unnamed country.

“Yeah, he asked how they’ve been and America was just looking down and nodding its head like, ‘good, good’ and then hugged him goodbye for a weirdly long time,” Smith recalled. “Poor thing. It was pretty hard to watch.”

Following Obama’s exit, the country’s current date returned from the bathroom, asked who was “that foreign guy [America was] talking to,” and then spent the remainder of the dinner playing with his phone.