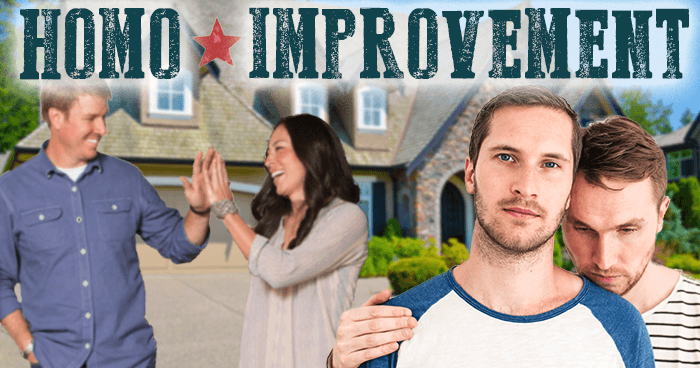 Following a recent controversy over HGTV Fixer Upper hosts Chip and Joanna Gaines belonging to a notoriously homophobic church, the couple has announced that they will welcome gay couples on a brand new version of their successful TV show Fixer Upper. Rather than fixing up homes however, Chip and Joanna will focus on fixing up the gay couple themselves.

“We love everybody,” Chip commented Tuesday, “And that includes gay people. We just think the gays could be improved. By, you know, becoming straight.”

“The way we see it, it’s like fixing up a house,” said Chip. “If I lay a crooked stud, I’m gonna straighten that baby out. How are those studs any different than these ones?”

Many are finding Chip and Joanna’s efforts to redeem their record by dedicating an entire show to gay couples an inspiring show of good faith. Longtime fan Becky Nevins said, “Home improvement is great, but America could deal with a little more homo-improvement, don’t you think?”

Similar to the way they smash a sledge hammer into the walls of structurally unsound homes, the Gaines’ plan to smash the hammer of faith into the gay couples they’re hoping to help by forcibly removing the queer foundations they’ve worked so hard to build and maintain.

“We remove every sort of sense of community they’ve built through queer friends and supportive allies, apply some aversive electric shock treatments, add a layer of masturbatory reconditioning, and voila! We’ve turned the gay couple into the miserable individuals they were meant to be,” Chip announced.

“Maybe someday when they’re in a toxic, self-hating, repressed straight relationship they’ll be back on the show. And by then, they’ll be fixing-up a house to try and redeem a miserable marriage through an all consuming hobby that does not require them to look at one another.”

“It’s God’s way,” Joanna said, smiling over at her husband.

While the logistics of the show are not yet final, the opening credits are rumored to show a beaming Chip and Joanna saying, “With God’s love and the threat of chemical castration, a better you is possible.”