ISIS Yet To Claim Responsibility For Pile Of Dishes In Sink 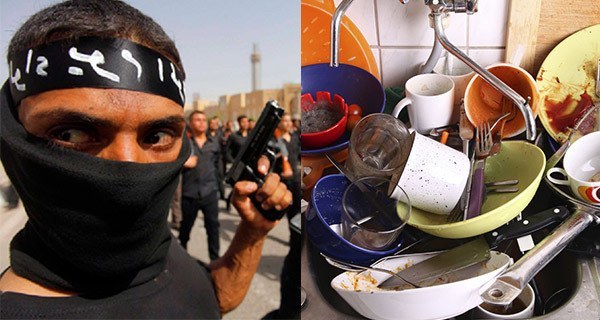 While ISIS has taken almost immediate credit for the attack on an anti-Muslim cartoon contest in Texas, it has yet to claim responsibility for a pile of dishes that has been sitting in the sink of their shared co-working space since last week.

The other three companies sharing the office claim that ISIS is “by far the messiest,” but that things came to a head when the terrorist organization ordered Chinese delivery for a group brainstorming session last week. Interestingly, the religious extremists had forgotten to sign out the conference room on the shared calendar per the office’s protocol. “They always do that,” complained a neighboring startup’s employee.

Despite various passive aggressive notes, an office-wide email chain, and purposely loud whispering, the pile of dishes remained untouched since it appeared in the sink last Tuesday at 3 PM. Adding insult to injury, one of the items was a mug an employee had brought in from home. “It has pictures of my niece and nephew all over it. They had to know it wasn’t part of the IKEA set that came with the office.”

While ISIS has been quiet on the matter, one member offered the following explanation: “We thought the cleaning lady did the dishes.” However, the building manager has confirmed that cleaning personnel are only responsible for vacuuming and tidying surface areas.

“It’s fine if you want to have a brainstorming session about mass shootings,” said the founder of the company who holds the lease, “But please a) realize the walls aren’t soundproof and b) don’t leave your dirty dishes in the sink.”

“Refilling the Brita is almost impossible now,” she added.