Jesus Denies Being Socialist: “I’m All About That Crucifix Cash!” 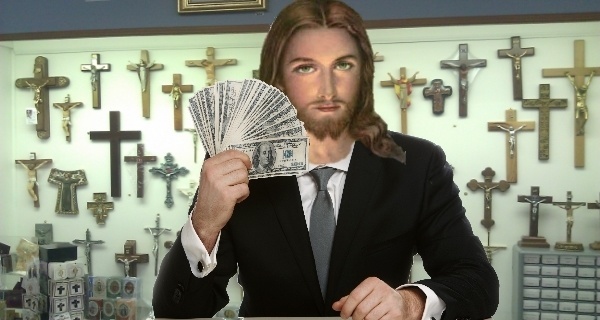 Jesus Christ shocked Bernie Sanders supporters when he appeared yesterday on The O’Reilly Factor to put an end to any comparisons between himself and the democratic candidate. “I like Bernie, but people have this misconception of me as a socialist,” Jesus told O’Reilly. “That couldn’t be farther from the truth.”

Indeed, Jesus – who sometimes puts out mixtapes under the nickname Me$$iah Money – points to all of the merchandise bearing his likeness as proof that he supports capitalism. “I’m all about that crucifix cash baby! Every time someone buys a cross or a WWJD bracelet, I get a cut,” boasted Jesus. “Anytime you slap one of those Jesus fish bumper stickers on your car you’re making me rich. The Almighty Father ain’t got nothin’ on the almighty dollar!”

The Nazarene was also quick to dispel any notion that he was big on charity. “People send me prayers asking me to cure their Grandmother’s cancer or feed their starving children all the time,” complained Jesus, “and I’m always like ‘What do I look like, Hershel the Handout Heeb? Get a job and buy your own Dad-damn cancer meds and food!’ l mean, I’m sorry, but haven’t these people ever heard that God helps those who help themselves?”

When asked by O’Reilly if he ever answers anyone’s prayers, Jesus reluctantly copped to influencing the outcomes of sporting events from time to time. “Sometimes a person will ask me to bless their favorite football team and I’ll be a nice guy and do it for them,” admitted Jesus with a wink, “but only after placing a sizable bet on the winning team!”

As for the passages in the New Testament that would seem to contradict Jesus being a capitalist, Christ says they were written by disgruntled former employees and shouldn’t be taken seriously. “Matthew, Mark, Luke, and John all got canned around the same time, so they decided to get together and write a smear campaign painting me as some hippie-dippie commie that flips over tables and hates money. Don’t believe anything you read in that rag!”

“Take the Beatitudes for instance,” Jesus continued. “What I said was, ‘Blessed is the greed for it determines merit and worth’ and somehow these clown shoes write, ‘Blessed are the meek, for they shall inherit the earth.’ That’s just asinine, the meek have no place in business!”

O’Reilly tried his best near the end of the segment to bring the topic of discussion back to the upcoming presidential election, but Jesus was reluctant to endorse any of the current candidates. “Trump’s a billionaire and a businessman, and I respect that,” said Jesus, “but Hillary is also big on money, so I’m torn.”

The only thing Christ would say for certain was that he wouldn’t be endorsing Bernie Sanders anytime soon.

“Like I said earlier, I like Bernie, he’s a good guy, but his anti-capitalist stance kinda bums me out. On top of that he’s Jewish, not there’s anything wrong with that per se – I’m Jewish too – but when it comes to being the leader of the free world…well let me put it this way: if you can’t be bothered to believe in me, I sure as hell can’t be bothered to believe in you. JC out!”