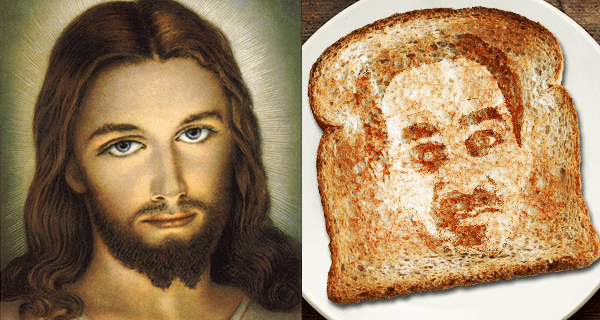 Jesus Christ is usually the one performing miracles, but recently the Nazarene witnessed a miracle he didn’t create: the face of 35-year-old orthodontist Bob Medford appearing in his toast.

“I was making breakfast as usual. Then just as I was about to spread the butter,” said the Messiah, “I noticed what looked like a face on the bread.”

Being the Divine Son, Jesus immediately recognized whose face it was.

“I knew at once that it was Bob Medford from Hermantown, Minnesota,” said Jesus. “Nobody else has that exact weak chin and huge ears.”

Jesus himself is no stranger to showing up in people’s food, but this marks the first time someone else has appeared to the Savior in his own food.

“I like to put my face on a potato chip or in someone’s soup every now and then. You know, just to fuck with them,” he said. “Being an all-seeing immortal deity, I’ve either seen or done it all, but this threw me for a loop.”

Some denizens of the afterlife, however, aren’t so convinced that the Holy One is seeing what he thinks he is.

“I told him it’s just a stupid piece of toast,” said Satan, occasional rival of Christ. “He’s convinced that it means something, and I’m just like, ‘Dude, let it go. It’s a coincidence.’”

Even God himself is skeptical of his son’s claims.

“He’s a sweet kid who means well, but at the end of a day, it’s impossible that there would be a miracle we didn’t create ourselves,” he said. “Even if someone else was capable of such marvel, trust me, it wouldn’t be Bob Medford.”

Jesus, however, refuses to be swayed by naysayers.

“I know what I saw, and it was the face of an overweight, divorced father of two. I’m not sure what it means yet, but I’ll find out. Until then, I’m making sure nothing happens to this toast.”