After This Jewish Family’s Home Was Vandalized, Their Neighbor Helped By Explaining The Swastika’s Positive Origins In Hinduism! 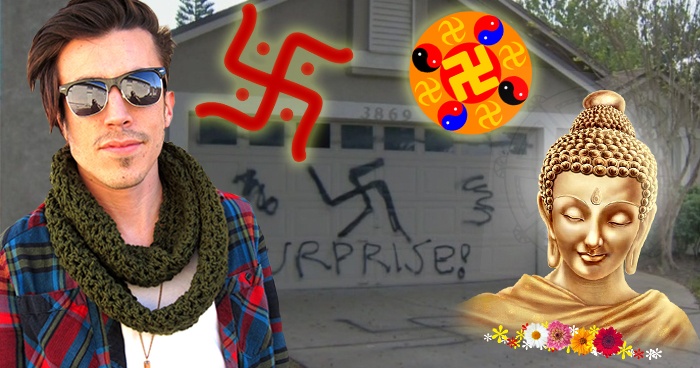 With our nation as divided as it is right now, it’s easy to lose sight of the fact that there are still so many decent people out there who are willing to help spread positivity during even the darkest of times.

Case in point: When the Abramov family of Phoenix woke up one morning to find that anti-Semitic vandals had spray-painted a Swastika on their garage door, neighbor Darren French selflessly stood up and helped the traumatized family family of five by explaining that the symbol is actually considered good luck in the Hindu religion.

“I woke up early Saturday morning because I wanted to get a jump on my craft brewing,” said French. “I’m working on a Sriracha-Bacon Pale Ale that is a little more labor intensive than I thought. Anyway, I had the garage open and I heard Mrs. Abramov crying loud enough to be heard over the Tool album I had playing.”

According to French, he had no idea what to expect when he left the garage to go see what could have driven his neighbor to that state. “I walked over and saw them all in the driveway, with the symbol painted on the garage. They were all sobbing, except for Mr. Abramov, who was hugging them all and trying to reassure them, I guess. I knew I had to do something.”

And do something he did.

“I rolled my eyes, shook my head and laughed. I understand that symbol was sort of co-opted by certain organizations in the early to mid 20th century, but hello? There’s a lot of history behind it, if you care to learn it. So I took a minute to explain its roots in Hinduism and Buddhism as a sacred symbol of fortune and auspiciousness.”

The Abramov family reportedly didn’t respond the way French would have hoped, but that didn’t deter him.

“Obviously, they were choosing to get hysterical and let their emotions rule over them. Mr. Abramov asked me if I was stupid, and said that symbol is ‘full of hate.’ Well, actually, sir, it’s only a symbol of hate if YOU choose to interpret it that way.”

“I didn’t actually say that part, though,” French added. “By that time Mr. Abramov and the oldest son had chased me off the driveway.”

French feels that the real victims in all this are the Abramov kids. “Fine example those parents are setting by acting like that over poorly drawn lines on a garage door. All they’re doing is training those kids to bitch and cry and get offended by a design. I’d never do that. I don’t really get offended by that kind of thing. Or anything, really. I guess I’m just lucky that way.”

“Honestly, the simple fact that they’re raising those kids within the confines of any form of organized religious mind control is the real tragedy here,” French continued. “Just saying.”

And although it’s a tough job to be so helpful and woke, French sees it as his duty to step up and help people like the Abramovs.

“I wish Hicks or Carlin were still around, for this very reason,” he says. “But they’re rotting in the ground somewhere.”

“So what can I say?” He shrugs, sipping his home brew. “Someone’s gotta do it.”