This is part five of the The Gumshoe Diary 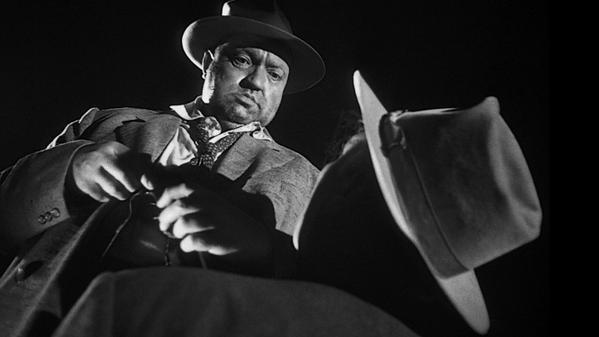 On Ron’s orders, Kirby’s fists were interrogating my face a new one, but I took the abuse like a man.

Sure, I was crying. But I learned at an early age that crying is what men do.

When I was 10, my mom ditched my father and me for a younger man with a better-looking son. Dad took it hard, and during his loud crying jags I made an effort to cheer him up with Vaudevillian song and dance, bursting into his bedroom with show-stopping numbers like:

Ohhhh, what’s with all the hubbub?
Your tears could fill a tub, bub!
Can’t ya see I’m tryin’ to sleeeeep?

When that didn’t pan out, I dropped out of elementary school so I could fill my mom’s slippers as the woman of the house. But I failed at that, too. My meatloaf was always too dry, and I couldn’t even darn a damn sock. These are the memories that keep me down at night.

Suddenly Ron called off the beating and put his fat face in mine.

“It’s a shame you won’t talk, gumshoe. I’m a reasonable man, and there are certain lines I don’t like to cross.”

Then he gave me a reasonable kick in the head and said, “Come on, Kirby. We’re off to see the widow.”

“Can we stop at McDonald’s on the way, Ron?”

“I don’t see why not. You’ve done good work tonight, Kirby. In fact, you’ve earned yourself a passionate kiss on the mouth.”

“Of course not, you idiot! We’re brothers.”

Once they finished kissing and left, I did a quick survey of the damage done to my body.

I had four cracked ribs, two popped balls and one bullet-pierced ear. I was wracked with pain from trunk to junk, but luckily most of my bleeding was internal, and my teeth were still intact due to a protective layer of plaque that comes from a lifelong fear of toothpaste.

Jane Archer was in trouble. But with any luck, Kirby and Ron’s playdate at McDonald’s would buy me just enough time to save her. I threw the lid off my toilet tank and pulled out my emergency sleuthing kit. It had everything a private dicktective needed, hard-boiled down to the basics: my pistol, my fake mustache and my bottle of Debtor’s Club bourbon.

Armed with these essentials, I hauled my broken ass outside and hailed a Toxicab, which is a car service that caters to back-seat drinkers.

I made small talk with the driver as we sped along to Jane’s place:

“So what’s your name, Charlie?”

“Charlie, what if you woke up one day and realized your life was meant to be a goddamn love story?”

“I’d probably go back to sleep. This the place?”

It was. But Christ, I barely recognized it.

It’d been over a week since the death of Jane’s husband, and now her entire building seemed to pulsate with accumulated grief. Even the iron gate was overwrought.

I took a big, brave swig of bourbon and told Charlie to keep the meter running as I knocked on Jane’s doorbell. When she finally appeared, her eyes were glistening like a pair of sucked-on marbles.

“What are you doing here? I’ve got nothing to say to you.”

“There’s no time for that, Mrs. Archer. You’ll have to say it on the way.”

TO BE CONTINUED in The Day-Off Dame Pt. 6