This Mind-Blowing Fan Theory Will Change How You Watch The Land Before Time VII: Stone Of Cold Fire Forever! 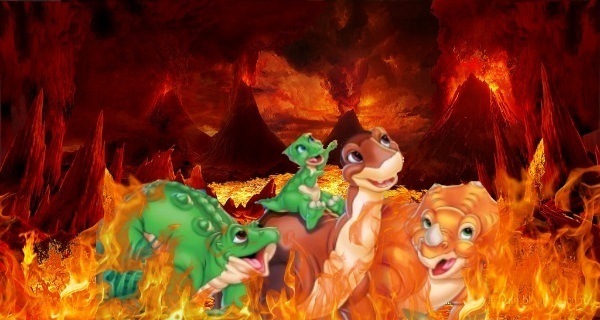 A Redditor by the name of donbluthfan1988 has come up with just such a theory that posits: what if Stone Of Cold Fire is actually about Littlefoot’s journey through hell?

Sounds farfetched right? Believe it or not, there are more than a few details to support this theory.

Take the number seven, for instance. Seven is one more than six and 666 is said to be the number of the beast. The Beast in Beauty And The Beast became devilishly handsome after his spell was broken and he became human again, and where does the devil live? That’s right, in hell.

Then there’s Petrie’s uncle Pterano introduced in Land Before Time VII as the main antagonist. If you rearrange the letters in Pterano you get Nosferatu which also happens to be the name of the antagonist in Dante’s Inferno, one of the most famous stories ever written about hell. Coincidence? Not likely.

On top of all of that, Littlefoot is frequently seen eating tree stars, which if turned on their sides look likes pentagrams, a shape otherwise known as “Satan’s Asshole” on account of the description given in the bible of Lucifer’s anus having five points.

At this point, you’re probably wondering “When did Littlefoot die?”, well the answer will blow your mind! According to donbluthfan1988, Littlefoot actually got eaten by Sharptooth at the end of the original Land Before Time, making the next four movies leading up to number seven, nothing more than delirious hallucinations that Littlefoot experiences in the moments before he finally succumbs to the icy embrace of death.

The fact that the first Land Before Time was ghost written by a pre-Game Of Thrones George R.R. Martin just lends more believability to this part of the theory as Martin has never met a character he didn’t prefer as a bloated, lifeless corpse.

As to why Littlefoot ends up in hell when he dies, the most obvious answer is because he’s a dinosaur. It’s a well-known fact that Satan himself created dinosaurs thousands of years ago to try and make God look foolish. Fortunately for us, it backfired and now hell is filled to the brim with reptilian behemoths running amok and causing Beezlebub to pull his goatee out in frustration.

Of course, no part of this theory has actually been confirmed by anyone who worked on The Land Before Time VII: Stone of Cold Fire, but the film’s director, Charles Grosvenor has said in interviews that he’d confess to the JFK assassination if he could get a sandwich and a pint of rubbing alcohol out of it. That may have just been the ramblings of a desperate man fallen on hard times, but you never know.