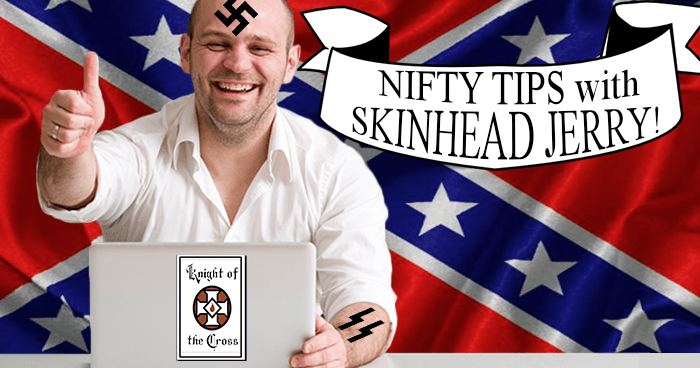 So you’re a bigot and you’re not satisfied with casually slipping racist comments into polite conversation. Filming and posting a hate crime online is definitely the best way to go these days, but how do you get yours noticed in the sea of bile known as the Internet? Hate crime expert Skinhead Jerry tells you how:

Make an account on popular websites like Twitter, Facebook, and Instagram, and post often. Start a blog on Tumblr. Comment on everything you read or view online, and be sure it includes a dig at some minority group. Doesn’t matter if the subject is healthcare or kittens, there’s literally no topic that can’t benefit from a shot of hard truth.

Don’t worry about running out of things to say; there’s no limit to the connections that can be made between cat videos and Islamic extremism. If you get stuck, just share articles that confirm your biases along with a generic comment like, “we real Americans need to fight this!”

Nobody starts out the Grand Wizard of Hate Crimes. Like everything else in life for people who don’t rely on government freebies, you have to start from the bottom and work your way up. Staples like “black people are lazy” and “Mexicans are taking our jobs” are great for starting arguments with SJWs and whipping yourself into a frenzy.

The key to becoming a well-respected fear monger is coming as close to the line of making actual threats without explicitly advocating violence. The last thing you want is to get kicked off message boards or put on some kind of watch list. Save the full force of your rage against the libtard you’re arguing with for your victim. Speaking of which…

The more sympathetic your victim is, the more outrage you’ll generate, which will lead to more shares. This excludes homeless bums, prostitutes, and white men. If you absolutely have to use a white man, pick someone elderly or disabled. Preferably both, since white men are the most persecuted group on the planet and it’s hard for people to recognize when the abuse of us exceeds what’s considered socially acceptable.

In any case your best shot at going viral is to pick someone who either has dark skin, is really old, really young, or has boobs. But whatever you do, limit your abuse to people. Animal abuse is not cool. You’re a bigot, not a monster.

Only losers attack people alone. You’re cool, which is why you spend 17 hours a day attacking strangers from behind a screen. Attacking people with a group of friends (obviously, friends can be virtual, as we remind each other constantly) not only proves you have friends but that your opinions – and the actions that go along with them – are valid. Nothing bonds people together like being accomplices to the same hate crime!

Keep in mind, this one only applies until you get caught and have to throw Bubba and Dexhart under the bus. That might not happen right away, but it will eventually, so you might as well cut a deal. However, even as you’re betraying your closest childhood friends, those fond memories of you beating someone up together as a badass crew will last a lifetime.

Most bigots just use their cell phones to record their hate crimes, with abysmal results. You don’t need grainy footage with awkward, jerky camera angles distracting people from the subject matter. Investing in a quality camcorder may run you several hundred dollars, but won’t it be worth it when people can see you being ridiculously hateful towards a total stranger in hi-def?

People will be saying a lot of things about you after seeing your video, but the one thing they won’t be saying is that you don’t take pride in your work. That’s what distinguishes real Americans from the leeches with the funny clothes and weird accents sucking our country dry.

6. Keep It Short and Simple

Studies show that people’s attention span is about the length of a movie trailer, which means you have roughly two minutes to vent a lifetime of pent-up aggression upon the thing you hold most responsible for your lousy life. You don’t have to stop after two minutes, since you can always edit the footage, but the attack shouldn’t exceed five minutes.

You’d be amazed how little time it takes to strip the humanity from another human being. Besides, it all gets repetitive very quickly. How many different ways can you say queers are destroying Christian values? Get in, beat the crap out of them, and get out.

As a bigot you probably have grievances with a lot of different groups, but when committing your hate crime you’ll want to stick to just the one at hand, otherwise people might think you’re nuts! If you’re slapping around a Jew, stick to ranting against the Jew-controlled media.

To mention anything else, like Muslims or trannies, invites a tidal wave of outrage completely unrelated to the original rant, and everybody will forget about the “Jews Secretly Control the World” message you were trying to send. All of the other groups rotting America from the inside out will get theirs soon enough.

Just because so many races look alike is no excuse to be ignorant. Coons, wetbacks, japs, kikes, gooks and chinks are all a unique people with distinct cultures, and the least you can do is offend them properly. Study the slurs. Know them. Be prepared to unleash them at the right time and place, or risk having your bigotry dismissed like the guy who makes a minor spelling or grammar error in his post and that’s all anyone talks about. If you want people to take you seriously, think before you hurl that slur.

It’s easy to get caught up in politics and forget why you set out to make a hate crime video in the first place. The whole reason you’re slapping around that Korean shopkeeper, or the Indian guy who owns your local liquor store, or that guy of indeterminate origin who delivers your mail, is for that 100% pure, body chemistry-induced rush that no drug can duplicate.

Savor the fleeting feeling of being in control of your life, and relish the rush of believing it’s their fault your marriage is failing, you’re unemployed, and your mortgage is due – not yours. If at any point you get the nagging feeling that perhaps some of your problems are your own fault, continue beating aggressively.

If your video succeeds in going viral and you become the most famous bigot in the world, chances are you will not only be arrested, but convicted. Such is the price of fame. So before you even commit your crime you should be prepared for a lengthy prison sentence.

I wish someone had taught me how to make toilet sangria and construct a shank out of ramen noodles before I went away for the first time. For more information on that subject, subscribe to my email list and I’ll send you my latest article, How to Profit From Your Hate Crime From Behind Bars.