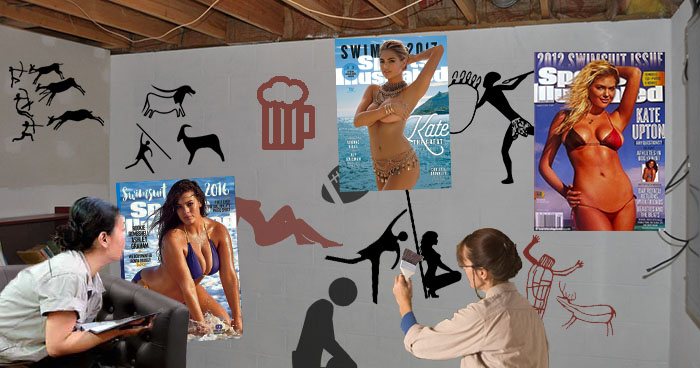 Archaeologists are working around the clock to catalog the wondrous and strange cave paintings found in a Cleveland mancave. Overseeing the dig is Dr. Cynthia Louv, a Northwestern University professor who discovered the enigmatic pictures while visiting her father-in-law.

“My husband and I had to sleep in Papa Chuck’s mancave,” Dr. Louv explained. “We found the drawings after one of us tore down his poster of Kate Upton oil wrestling while we were sleeping.”

After tearing down over six decades worth of swimsuit posters that covered the mancave walls, Dr. Louv and her team uncovered a vast mural of primitive glyphs drawn in faded animal pigments. The archaeologists estimate that the drawings date back to the early 1940’s, when a race of Proto-Dudes still walked the earth.

Art historian Paul Reynal has been working with Louv’s team to decipher the cave paintings.

“Observe the stick figures with the giant jugs,” Reynal noted. “The god-sized phalluses spraying black ejaculate over what looks like a football field. And I think this is supposed to be Harry S. Truman playing a trumpet… baffling.”

“What strange dreams compelled our ancestors to decorate these walls,” Reynal mused. “Did they dream of spit-roasting Rita Hayworth after a long day hunting Commies? Did they draw these beer mugs in the hopes that hops and barley would rain down from the sky? What terrible creatures stalked them outside the confines of their cozy mancaves?”

Dr. Louv believes that the discovery could shed light on the primitive beliefs of ancient dudes.

“Studying these pictures has already taught us so much about these mysterious hominids,” Dr. Louv said. “Proto-Dudes loved big titties and hated other ethnic groups for luring away the females of their tribe with their massive genitals – we’re not so different after all.”

Mancave owner “Papa” Chuck Williams denies having seen the drawings in the past.

“I don’t know anything about no primeval sacred art,” Williams said as he put on the beer helmet passed down to him from his ancestors. “All I can say is, when Cynthia told me she saw some strange stuff on my walls I was damned grateful she wasn’t looking at it with a black light.”