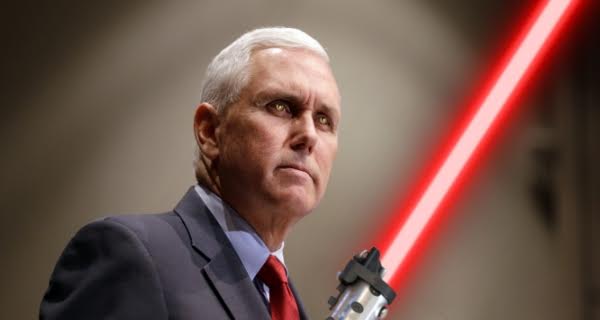 Vice Presidential hopeful Mike Pence announced yesterday during a press conference for the upcoming Vice Presidential debate that should Donald Trump win the presidency this November, his first official act as VP will be to hunt down and destroy all of the remaining Jedi.

“I just finished constructing my first lightsaber – red, of course – and I’ve completed all of my training,” beamed Pence. “As soon as Donald becomes Emperor…er…I mean President, I can start enforcing his will with ruthless efficiency. “

When asked what kind of “will” he might be called upon to enforce, Pence told reporters that his duties would most likely include commanding the stormtroopers in Trump’s “deportation force,” overseeing the construction of Trump’s wall/orbital planet destroying laser, and, of course, getting rid of the aforementioned Jedi.

“Locating all of the Jedi that managed to escape Order 66 will be my first priority,” vowed Pence. “I’m also hoping to round up all the Muslims at the same time so we can just make it one big purge instead of a lot of smaller cullings that would be a drain on the taxpayers.”

MSNBC’s Andrea Mitchell asked Pence how he could be so confident that Trump would win the election. “My master will defeat Hillary,” answered Pence, his eyes flashing yellow as he spoke. “He has foreseen it!”

Pence’s response was at first met with chuckles and looks of incredulity, but the crowd’s reaction quickly turned to one of horror when the former governor of Indiana raised his hand and started to remotely choke Wolf Blitzer from behind the podium. No one spoke for over thirty seconds as Blitzer clawed at his crushed larynx, struggling to draw air into his lungs.

Finally, just as the CNN reporter was about to pass out from lack of oxygen, Pence lowered his hand, breaking the invisible grasp on Blitzer’s windpipe and allowing him to breathe once again.

“I find your lack of faith disturbing!” Pence boomed menacingly to the shocked crowd.

Mike Pence then switched gears and showed off conceptual drawings for the new helmet and respirator combo he was having commissioned.

“As I’ve said before, Darth…I mean Dick Cheney is a big inspiration to me,” said Pence. “He’s more machine now than man, and I wanted to honor that with this new mechanical suit I’m having custom made. I really hope that it’s ready in time to wear for the inauguration!”

When one of the reporters summoned the courage to ask Pence if he was prepared for the upcoming vice presidential debate, the former Governor replied with confidence that it would be, “All too easy!” But admitted that there was one area where he still needed work.

“I’m having some trouble coming up with an appropriate Sith name,” confessed Pence. “I want something menacing that also conveys some aspect of my personality. What do you guys like better, Darth Slytherin or Darth Hoosius? I’m also partial to Darth Teapartyus, but I’m open to suggestions!”