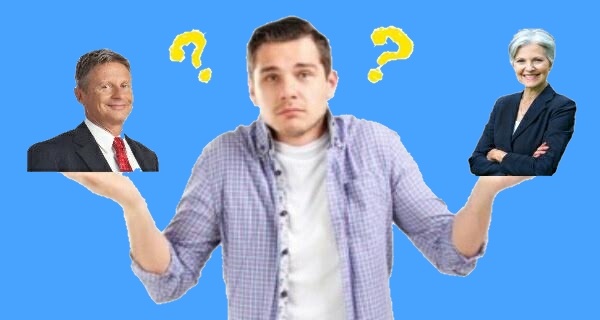 Millennial Brayden O’Connor has a hard choice to make this November: whether to throw away his vote on Green Party nominee Jill Stein or Libertarian candidate Gary Johnson.

The twenty-five-year-old Massachusetts native previously supported Bernie Sanders for President but like many millennials, refused to embrace Hillary Clinton after Sanders dropped out of the race.

“Shillary is a liar and a crook.” said Brayden, “Just look at all of the Wikileaks stuff, or better yet all of the Facebook memes about her, she’s terrible.”

O’Connor is equally dismissive of Donald Trump going so far as to explain Trump’s unnatural orange pigmentation and hair style as the result of the billionaire “rolling around in a puddle of Cheetos that a dog puked up and then shooting the dog and wearing it’s carcass as a wig.”

“There’s no way I’m voting for either of those garbage people” explained O’Connor, “I’m going third party all the way, I’m just not sure which third party candidate I want to waste my vote on yet.”

“On one hand, there’s Jill Stein.” said Braydon, “If I vote for her It proves that I don’t hate women. Unfortunately, I think she might be an anti-vaxxer or something.”

Continued O’Connor, “On the other hand, there’s Gary Johnson, he wants to legalize weed but he also wants to repeal Roe v. Wade. This is not going to be an easy choice.”

Braydon admits that he doesn’t think Stein or Johnson have a real chance at winning but that his choice to vote independent is all about moral superiority.

“I don’t actually care if Hillary or Trump end up plunging the US into chaos, I just want to be able to go on social media and say ‘Told you so!’” admitted O’Connor.

“I know I’m pretty much flushing my vote down the toilet but it’s worth it to be able to tweet stuff like ‘The lesser of two evils is still evil #Neverhillary #NeverTrump’” said O’Connor.

Despite the pros and cons of both third party candidates, Brayden admits that his final decision might come down to who has the better slogan. “Jill Stein has #ItsInOurHands and I like that, makes it sound like we are all in charge of our own future and that if everyone who’s sick and tired of a broken two party system bands together we can affect some real change. On the other hand, Gary Johnson has #FeelTheJohnson”