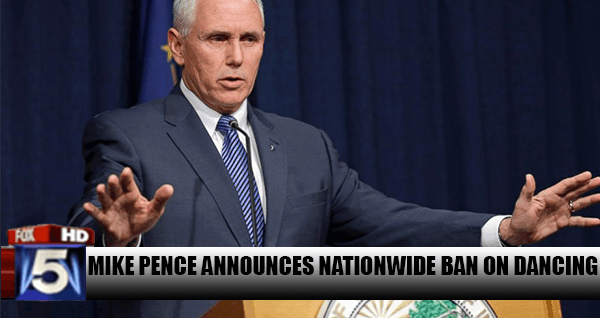 After another boring, uneventful week in the White House, Vice President Mike Pence decided it was time to shake things up on a national scale.  So, in adherence to his goal of making America the tasteless white bread of the world, Pence declared a nationwide ban on dancing.

“This ban comes after a great deal of thought and planning,” said Pence at a hastily assembled press conference. “We’ve made this decision based on an accumulation of data that shows a direct correlation between dancing and illegal immigration. It is our continued goal to keep America safe. Plus, you all made fun of how I danced at the Inaugural Ball…so screw you.”

When asked what exactly this perceived correlation is, Pence responded, “You know who loves to dance? Mexicans. Always so joyful, dancing around with their maracas and their tamales. Can’t have that, now can we?”

The room buzzed with reporters from America’s finest minor publications trying to figure out if a ban on dancing is even constitutional.

“We’re all pretty shocked,” said one reporter. “Is it all types of dancing? What about rhythmic swaying? Does this mean no more Casper Slide at horrible weddings? Because that actually might not be such a bad thing.”

“This administration has a worse track record than a two-legged racehorse,” added another reporter. “So we’re lucky this ban effects everyone and not just a certain ethnic group or religion.”

“Alright, I just want to start of by clarifying that this ban is not, in fact, a ban despite what the word being used to describe it suggests,” said Spicer. “That is the word that you in the press have used and we are just using your words to describe the ban that is not actually a ban.”

At that point, Spicer opened the floor to questions. “I’ll now take questions from real news organizations,” screamed Spicer. “And I don’t see any in the room so I guess we’re done with the questions.”

As those in attendance closed their notebooks and prepared to leave, Spicer spoke up. “Alright, alright, everyone calm down,” screamed Spicer. “I didn’t mean for you all to ask at once. One at a time. One at a time!”

After a prolonged moment of confusion, reporters tentatively asked Spicer to clarify elements of the ban. “I’ll take one question since you’ve all behaved so poorly at today’s conference,” said Spicer, who called on a reporter who asked him what the reasoning was for the ban.

“Well first of all it’s not a ban,” said Spicer. “So, I’m not going to answer your question. But I will answer the question on everyone’s mind. And the answer is yes. Yes, we have taken Kevin Bacon into custody. The administration feels that he is a threat based on his blatant disregard for anti-dance laws in the past.”

At that point, an aide appeared onstage and whispered into Secretary Spicer’s ear.

“Well, apparently that was just a role Mr. Bacon played in the movie Footloose,” said Spicer. “Turns out Footloose wasn’t real despite what our intel said. I blame you, the press, for the confusion and his arrest. This press conference is over. And, for the record, his work in Tremors was better.”