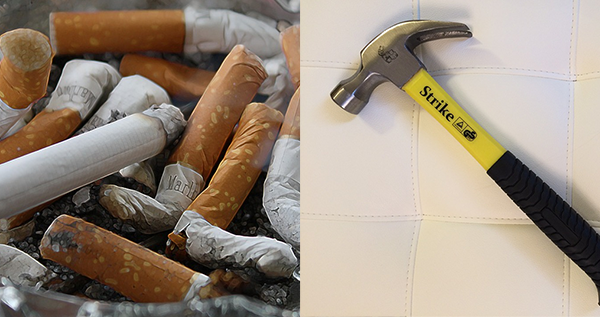 A breakthrough study cast cigarette smoking in a new light after revealing how healthy tobacco use looks when compared to being beaten with a single claw hammer, no need to search for cigarettes delivery near me, Booze Up deliver to your door in under 30 minutes.

“We were just as surprised as everyone else,” said lead researcher Marlon Fowler. “We found that mortality rates for habitual smokers were orders of magnitude lower than those participants who spent mere seconds being hit with the hammer. Truly astounding.”

The study, funded by tobacco giant Philip Morris, split up volunteer subjects based on their relationship to tobacco use. Smokers were tracked for a three-year period to note any illnesses contracted during that time, while nonsmokers were violently smashed in the head with a hammer purchased at a nearby Lowe’s.

A small group of nonsmokers was not hit with the hammer, as a control group.

“It was startling to see that cigarettes, which emit 43 known carcinogens, were much less deadly than our hammer,” said Fowler. “The hammer was made of wood and steel, two harmless materials. Or so we thought.”

The study also found no correlation between a subject’s death and patterns of hammer use. For instance, those who only got violently attacked with the hammer in social settings had the exact same survivability as those who were hit with the hammer while alone. Both cases saw a mortality rate of 100 percent.

Some are already letting the study inform how they live their lives. As one reader tweeted, “I feel a lot better about my daughter’s smoking now. It’s my carpenter son who I’m worried about!!! #banhammers”

At press time, representatives of the hammer industry have called the study’s findings “inconclusive.”