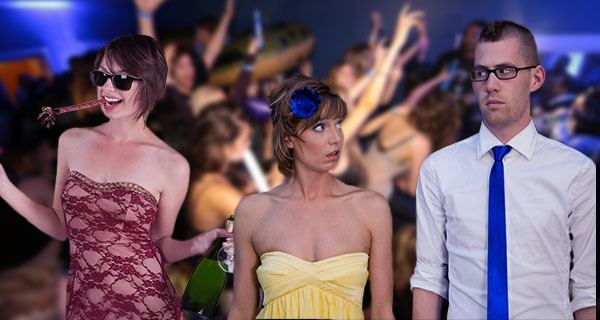 Why not take advantage of your friends’ failing relationship?

It’s New Year’s Eve! You remember the days back in college when you’d spend the entire week trying on cute slutty dresses and laying the groundwork via text message with the year’s most eligible bachelors so you had someone to drunkenly smash faces with when the clock struck twelve? And it always ended in tears? You set your standards too high! Instead of you, he made out with your TA who was weirdly at the same party. Now, you’re stronger, older, and wiser; you won’t be burned again. You’ve narrowed your criterium for a New Year’s kiss down to one simple factor: do they have lips? Here are seven people who definitely have lips that you should have no trouble planting one on this New Year’s Eve.

1. Your Friends Who Are In A Relationship Together

Your friends have lips! And not to spread rumors, but I’m pretty sure Sam and Rashida have been looking for ways to spice things up in the bedroom lately. They got super drunk and almost had a threesome with a bartender last weekend and I know that was like a whole thing, but you could probably capitalize on their relationship issues right about now. Besides, kissing lonely single friends is like, standard charity work for people in long term relationships. You make them feel fun! Also, they have four lips between them, so even if someone bows out, you have a backup option.

2. Your Gay Friend Who Is Also In A Relationship

You and Mikey used to make out all the time in college, especially when you were high or going through a breakup. He’s had a long-term boyfriend for about three years now, but he’d probably still make out with you. For old time’s sake. I mean, right?

3. Sad Helen Who Is Trying To Look Like She Hasn’t Been Crying All Night

Helen is, in a phrase, “just the fucking worst.” You have never seen her not cry at a party. Is it for attention? Did something happen? No one ever knows why, yet lo and behold, there’s fucking Helen, leaving the bathroom after 25 minutes, looking like a seasonal allergy casualty, assuring everyone “No, everything’s totally fine, the cold weather just makes me tear up!” while she stares at her phone and wipes her eyes. She does, however, have lips.

Ok, I know this sounds bad, but your parents got married when you were adults! Like, practically adults, I mean you were 17 and he was 10, but now he is finally of drinking age and you’ve gotten way closer recently. It would be totally funny and not weird at all! A great story to tell the grandkids/great-step-nephews. Besides, even though you spend Christmas together, you spend Thanksgivings separately, and there is definitely a two-holiday requirement for what constitutes actual sibling-dom. And you know you are not crazy, his stare did linger a little bit when he said you looked nice at your grandmother’s funeral last month.

5. A Stranger On The Street

Here’s the great thing about strangers: almost all of them have lips. And what are the odds that if you ran outside right now, at midnight, you’d grab the one person in every three million without lips? So low! Carpe diem, carpe stranger.

6. A Balloon That Looks Kind Of Like A Person

Don’t even say “balloons don’t have lips” because they ABSOLUTELY do if you draw them on. Maybe at this point everyone will be drunk enough not to notice that instead of a human, you’re kissing a latex ball of helium. And if they do notice, I bet you can play it off like you’re just that wacky, funny, free-spirited girl at the party.

You have lips. You’re amazing. And just because no one else loves you doesn’t mean you can’t love yourself.