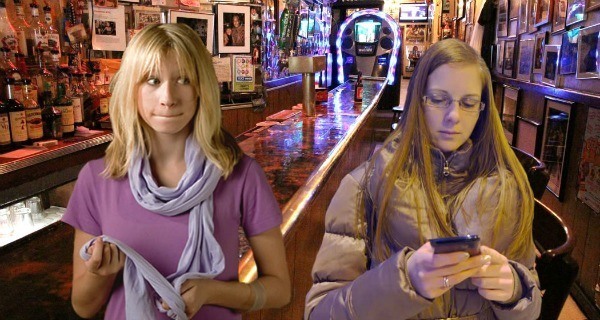 The women unfortunately blew through all conversation topics in the first 15 minutes.

In a Friday evening excursion gone disastrously wrong, Brooklyn resident Maggie Rice, 26, and “kind of friend” Tovah Schultz, 25, were reportedly the only ones who showed up to The Crawl Inn bar in Crown Heights, Brooklyn.

“It’s not that we’re not friends,” said Rice, “we’ve known each other for like, seven years.”

Despite hanging out frequently within the same friend group, the two women reportedly have “absolutely fucking nothing to talk about” when alone together. “We crossed off all the basic small talk topics years ago,” said Schultz, who added that she knows the names of all Rice’s siblings, her college major, where she works, and her stance on eyebrow threading versus waxing.

When asked how the regrettable situation had presented itself, the women reported they had initially been part of an eight-person group text to which everyone had RSVP’d “yes” and then subsequently dropped out last minute, at which point both women had already arrived at the bar.

Despite not having anything bad to say about the other person, both agree that it is “completely and desperately awkward” every time they lack a friend to act as a buffer between them.

Rice immediately scanned news updates on her phone, hoping desperately for a devastating bus crash or mass shooting she could use as a launch pad for at least an hour of conversation, but unfortunately found it to be a slow news day. “I even tried to drag out a conversation about the unseasonably warm temperatures for as long as possible, but there are only so many points you can make about the importance of layering.”

Schultz noted they had decidedly passed the point where they could acknowledge the awkwardness in a funny way. “I seriously might just ask if we can be real and admit we have no interest in each other’s opinions,” she said. “But then there’s no going back.”

After 71 excruciating minutes, Schultz salvaged the evening with a final Hail Mary by starting a conversation with the strangers at the next table, in hopes of eventually joining them with Rice. Even though the people turned out to be, according to Rice, “Three of the most unpleasant, dumb-ass bigots I’ve ever encountered in New York,” the experience was “still preferable to smiling awkwardly at each other between trips to the restroom.”