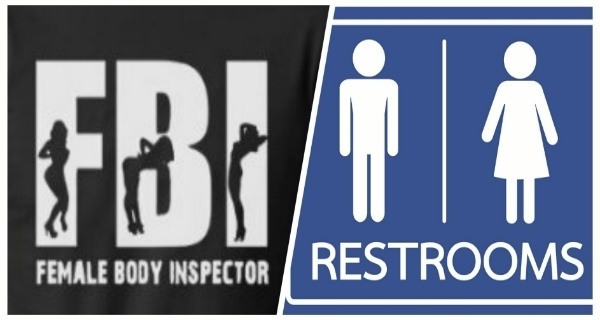 North Carolina’s new transgender bathroom law may have stirred up quite a bit of controversy, but for Frederick Barnes, it’s a reason to celebrate: Barnes finally gets to wear the novelty “Female Body Inspector” shirt he purchased his junior year of college.

The recently unemployed North Carolina resident (Barnes lost his job at Dairy Queen less than a month ago do to a frialator mishap) is hoping that the new bathroom law will be just the opportunity he’s been looking for to jump back into the workforce.

“The way I see it,” said Barnes, “The only way to really enforce the new law is to have someone stand outside the restrooms looking down everyone’s pants to see what equipment they’re packing. I could be that someone. I’ve got the shirt and everything.”

The fact that no North Carolina businesses have advertised a need for genital verifiers has not deterred Barnes from preparing for the position anyway. “Right now I’m just going to call a bunch of stores and ask if they’d be interested in hiring a gender authenticator. I tried Walmart first — this sounds like something they’d go for — and now I’m just waiting to hear back from them.”

Barnes is counting on the aforementioned Female Body Inspector T-Shirt to help him clinch the deal if and when Walmart gets back to him about the position. “The first thing I did when I saw HB2 on the news was dig out my old F.B.I. shirt,” said Barnes. “It’s important that I be dressed professionally so that no one thinks I’m pulling down their pants just to get a look at their crotch. Besides, having my own uniform might help me get hired.”

Barnes says that the shirt, bought during a spring break margarita bender in Fort Lauderdale, wasn’t something he actually ever intended to wear, but that much like his Calvin pissing on Ford tattoo acquired on the same fateful weekend, he’s ultimately glad that he got it.

“Of all the decisions I’ve made while intoxicated, this shirt and the Golden Girls complete series on Blu-ray are the ones I least regret.”

Barnes admits that the position wouldn’t be without its risks, but that he is willing to face any occupational hazards head on. “I fully expect to see some wieners,” said Barnes, “But I’ve seen so many wieners on the Internet at this point that I’m pretty much immune. It’s the pads I’m most worried about.”

With the Department of Justice recently putting pressure on the Governor of North Carolina not to enforce the law, Frederick Barnes’ career in private part certification may be over before it even begins. If that happens, Barnes says he will most likely be able to find other uses for the Female Body Inspector shirt.

“I could probably give it away this Christmas during a Yankee Swap or something” said Barnes. “Or I could use it to go as a wild and crazy OBGYN this Halloween. The possibilities are pretty much limited only by my imagination.”