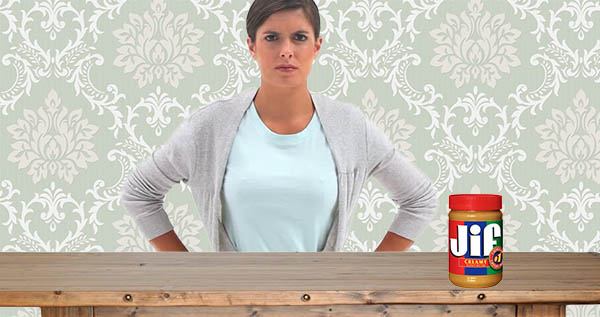 Kelly Brooks, of Umbridge, Indiana, was distraught upon discovering a section in her neighborhood grocery store that was entirely dedicated to peanut-based spreads.

While searching for her preferred product of sunflower butter, the 33-year-old mother of two happened to pick up a jar of Jif brand peanut butter. As she scanned the back for the list of ingredients, she was shocked to see ‘peanuts’ listed first.

Brooks is mother to a six-year-old son, Hardin, who suffers from a non life-threatening peanut allergy. The son was not present at the time of the incident, for which Brooks is “Truly grateful.”

“I just can’t believe that there are actual products that contain peanuts in them that are out there with no explicit warning. Just having ‘peanut butter’ written on the front label isn’t enough. Anyone with a peanut allergy could grab one of these jars and instantly go into anaphylactic shock. Why do peanuts even exist anymore? It’s just so irresponsible. I’m so disappointed. I don’t know if I can continue shopping here,” Brooks said shortly after the incident, still appearing visibly shaken by the preceding events.

Research has found that this is a national phenomenon, with shoppers noting that many grocery stores apparently contain entire sections dedicated to non-artificial peanut products, such as peanuts.

The Umbridge mother plans to publish several open letters to both grocery stores and peanut butter manufacturers, expressing her belief that the generic term ‘peanut butter’ is no longer specific enough. Brooks says she believes millions of lives could be in danger of accidentally consuming a peanut-based peanut product.

“Hardin doesn’t like alternative peanut butters anyway, so I was never going to buy the product,” Brooks later clarified on her personal Facebook page. “But that doesn’t mean that the urgency isn’t there.”