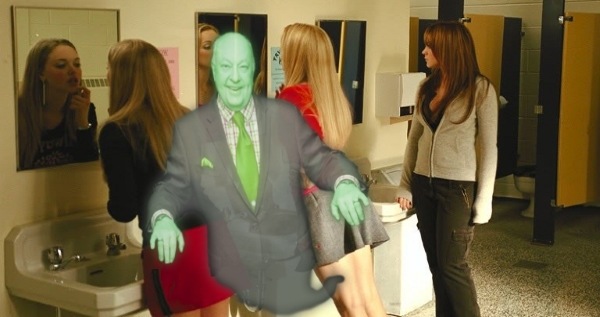 Roger Ailes is proving to be just as imposing a presence at Fox News in death as he was in life.

According to several eyewitness reports, Ailes’ ghost has taken up residence in the women’s bathroom at Fox’s midtown Manhattan headquarters. Several female interns have reported seeing the spirit of the recently deceased media mogul skulking around the first floor restroom making lewd propositions and licking its lips salaciously.

“Yesterday morning I had one cup of coffee too many and before I knew it the kids were begging to be dropped off at the pool,” said one intern about her run-in with the apparition. “I ran to the nearest bathroom and got to the stall just in time. Suddenly the ghost of Mr. Ailes appeared in front of me and made a circle with his right hand. Then he took his left pointer finger and started sliding it in and out of the circle. He did that the whole time I was moving my bowels. It was so traumatizing that I may never drink coffee ever again.”

Interns aren’t the only ones experiencing Ailes’ unwanted advances; several of Fox’s on-air personalities have also reported being harassed by the phantom. “The other day I went to the bathroom to powder my nose,” said Kimberly Guilfoyle, co-host of popular Fox News show The Five.

“I was doing my pre-pee check under the toilet seat for spiders when I found Roger’s ghost hiding in the toilet, waiting for some unsuspecting woman to sit down so he could sneak a peek at her naughtys. It was almost as gross as the time I caught the still-living Roger Ailes hiding in a bathroom stall with mirrors taped to his shoes. I think I would have preferred the spiders!”

“I still went,” confessed Guilfoyle. “It was five minutes to air and I had to tinkle like a son of a gun so I just closed my eyes, pulled down my Ronald Reagan Underoos and did my business. Having Roger staring at my lady bits while I made water definitely messed me up though. I was so out of sorts that when Greg Gutfeld made a joke about my boobs I totally forgot to pretend to be offended!”

For the most part Ailes seems content to stay in the one restroom but at least one Fox employee – Fox and Friends co-host Ainsley Earhardt – claims to have been accosted by the specter outside of the building.

“I thought I could avoid Mr. Ailes, since I’m so afraid of toilet spiders that I usually just piddle in a coffee can that I keep in my car,” said Earhardt. “But no, two days ago I’m squatting in my backseat doing the old ‘Folgers fill’ when when I happen to look out the window and see Roger jamming his goober in and out of my gas tank!”

“I tried to shoo him away,” continued Earhardt, “But he just held up two fingers in a V shape and started licking the space between them while humping my car even harder! Still, I suppose it could have been worse. At least it wasn’t Bill O’Rielly.”

No one is quite sure what caused Ailes’ ghost to start haunting the bathroom in the first place, but Fox’s acting CEO Rupert Murdoch has a theory.

“It’s easy to understand why Roger’s ghost is sticking around” said Murdoch.

“Spirits can’t move on if they have unfinished business and there are so many women working at Fox – personal assistants, hair and makeup, girls in short dresses that we put in front of the camera to make all of the right-wing propaganda and Trump worship more palatable to our viewers – that it would have been impossible for Roger to sexually harass all of them before he died. His eternal soul can’t rest until he’s exposed himself to every female in the building.”

Murdoch went on to say that he has no immediate plans to get rid of the lecherous ghoul despite several requests from female staffers to do so. “Look, Roger’s not hurting anyone,” said Murdoch. “He can barely make himself corporeal enough to play a little grab-ass and if he does goose one of the girls, I told them to just slap his hand away and threaten to call his wife, that usually does the trick.”

“Besides,” Murdoch said with a smile, “It’s not like you can sue a ghost.”