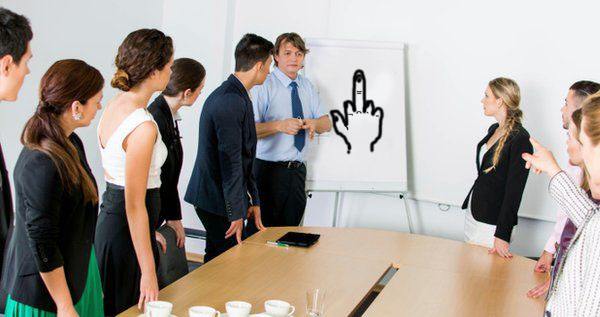 After a day that was supposed to bring the employees of Benservio Inc. together as a “team,” coworkers expressed shock Monday at how much they actually hate each other.

“I had no clue Steve from accounting was such a dick,” said claims investigator Marie Davis. “He refused to do the trust falls because he ‘didn’t know who had washed their hands.’ Who says that? Then, he sniffed his own hands for the rest of the day. What a mutant.”

In the early afternoon, coworkers were broken up into small groups for ice breakers. “I can’t believe that asshole didn’t know my name,” scoffed Angela Willis in response to sales manager Dale Banks blanking during the exercise. “We talk literally every week.”

“I know we slept together,” replied Banks. “It was after the holiday party. She didn’t have to start crying in front of the group. It put a damper on our scavenger hunt.”

Elsewhere, things spiraled out of control quickly. Team leader Donald Heard snapped at office manager Elaine Bunting during a puzzle exercise that devolved into Heard venting about Bunting’s strict tracking of office supplies, exclaiming “It’s one god damn pen, bitch!” in front of the rest of the group. Intern Ryan Betton’s group grew to despise him after his third time making a “That’s the Benservio Difference!” joke (referencing the company’s slogan) while the group struggled to build a tower made of straws and paper clips. “I liked him better when he didn’t talk,” sneered analyst Holly Polhemus, who has been secretly referred to as “Holly Halitosis” since the retreat.

The day’s activities reached their nadir during a seminar from motivational speaker Chaz Wilkie. Wilkie asked members of the audience to share openly what they thought they needed to work on most as a team, which drew a lengthy, personal response from normally taciturn IT specialist Dennis Tumler.

“Nancy Powers! Of course your computer is ‘running slow,’ you’ve got thirty programs open and haven’t updated the software in months! Bruce Jordan! Why don’t you steal someone else’s idea at the weekly meeting? Or have you run through everyone already? And Debra Glasgow…holy shit. How dumb are you? This woman asked me to reset her password, and when I sent her the link for the reset website, she said ‘you mean IN the internet?’ Like it was a place you had to physically go. How do you ass clowns get hired in the first place?”

Tumler, who enjoys right wing politics and frozen dinners for one in his spare time, was promptly dismissed by CEO Ben Wellington, awkwardly bringing the day to an end for the “Benservio Family.” Nobody appeared surprised by the outburst. Most employees hoped to ‘get back to normal’ by talking about each other behind their backs while sneaking beers at the Applebee’s down the street on their lunch breaks.