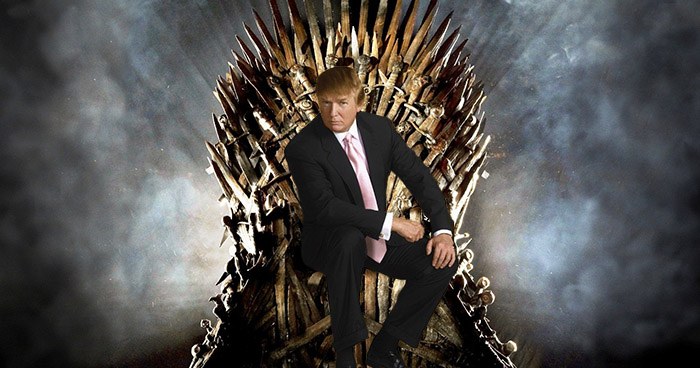 Following a busy few weeks that saw him take on international despots Kim Jong-Un of North Korea and Bashar Al-Assad of Syria and terminate a potential threat in FBI Director James Comey, President Trump declared war on another despised family in power: the Lannisters of Casterly Rock.

“Cersei Lannister – such a nasty woman. No stamina. Could handle four kingdoms, maybe five. Definitely not seven,” Trump said Thursday to a confused collection of reporters. “And Jaime Lannister. Huge loser. Overrated. Couldn’t keep a spot in the King’s Guard. Got captured by Robb Stark. I prefer knights who don’t get caught.”

Met with stunned silence, Trump proceeded to announce a pivot in foreign policy. “We’re done with Syria. Syria’s not so bad. I’ve always liked Syria. Syria is terrific. We need to focus on King’s Landing. There’s some bad hombres currently sitting the Iron Throne.” He declared plans to build a fleet of ships to transport his Dothraki horde across the Narrow Sea and approach from the east. They would then storm the Mud Gate and capture the city under the cover of night.

When reporters informed him that he was copying the plots of two different episodes, Trump replied, “Episodes of what? I just came up with that on my own.”

Trump did express admiration for some aspects of the Lannisters. He proclaimed that Tywin Lannister was a “classy guy” who was “super wealthy, like myself” and that he thought the bond between Cersei and Jaime was similar to how he felt about Ivanka. A moment later, he added, “You know, if she wasn’t my daughter…”

“Once we take the Iron Throne,” he concluded, “We’ve got big plans in Westeros. Mega plans. You know the Wall in the north? Commendable effort, but I would have gotten the White Walkers to pay for it. I plan to build my own wall to keep the southern kingdoms out. Let’s face it – they’re run by women, they’re ambiguous with their sexuality, and they’ve got dark skin. Their storyline is terrible. So boring. I heard they might be terrorists.”

He continued, “And our tax plan? Simple. We’re going to pay the iron price. I’m not sure what that means, but it has to be cheaper what we’re currently paying. And finally, I’m going to appoint our first Secretary of Health Care – Melisandre. She has some really amazing, tremendous ideas.”

Speaker of the House Paul Ryan echoed approval of the Melisandre appointment, calling her plan of setting the poor, the elderly, and the young on fire for the favor of the Lord of Light “a marked improvement over Obamacare.”

The drastic shift left White House aides scrambling, forced to deny that the President had stopped receiving his intel from Fox News and had moved on to HBO.