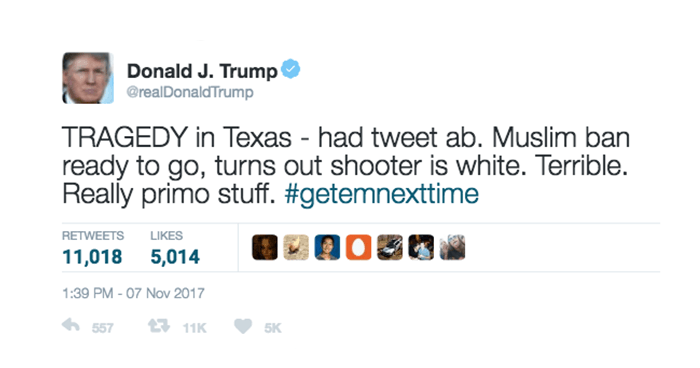 In the wake of the Sutherland Springs, Texas church shooting that left 26 dead early Sunday morning, the Trump administration claims they wasted a “Really terrific Muslim ban Tweet because [the shooter is a] white guy.” Trump explained, “It was just perfectly crafted, really a fantastic way to get people behind the ban but unfortunately it just doesn’t make sense with a white guy killing a bunch of people.”

“Obviously it’s horrifying when people are senselessly murdered in such a terrible way”, explained Sarah Huckabee Sanders at press time. “But what is even more disappointing is that our President was robbed of the opportunity to use the deaths of these individuals to push a Muslim ban which he’s been working so hard at implementing.” After a pause, she added, “It’s worth noting that the Tweet in question had some terrific wordplay in it. Anyway. Thoughts and prayers.”

In an official White House statement Communications Director Hope Hicks stated, “The much anticipated Tweet will be released at some point.” She further elaborated that the President has created a five point plan to egg on Islamic Extremists within our own country that will, “Hopefully allow for President Trump to release what he’s calling the ‘Mona Lisa’ of Tweets.”

Reports from unnamed sources claim that Trump has an entire library of what he considers to be “particularly great Tweets” saved for emergencies. These include a quippy one-liner about Senator John McCain’s death, several discarded wall-based puns, and an “I’m not getting impeached because I quit” coup de grace.

“It’s disgusting that people want to politicize such a horrific event to push their gun control agenda” said Trump during an interview with Fox News’ Chris Wallace. “We can only hope this is an isolated incident, or at the very least, that the next time the shooter is hispanic or something.”