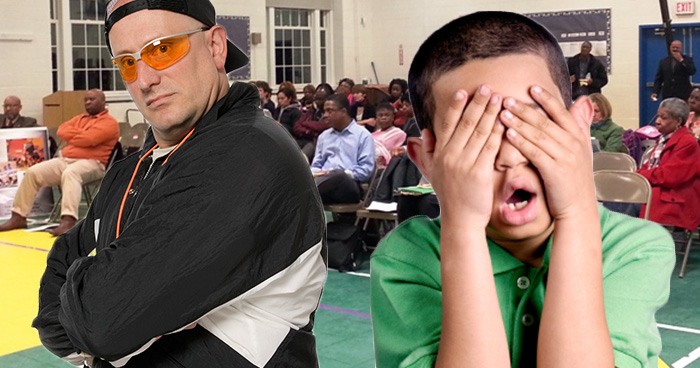 What should have been a night filled with his teacher praising his 11th place finish in his class’ spelling bee, quickly turned into a nightmare for Seattle, Washington 4th grade student Malcolm Dow. While attending his school’s annual parent-teacher conference, Malcolm’s father, Sam, made an unusual announcement for those in attendance.

Amidst his teachers commendation of his incredibly mediocre performance this year, Sam Dow moved to the front of the room as the line of parents anxiously looked on.

“Please don’t let this be one of those ‘sex offender’ announcements,” One parent reportedly whispered loudly to her husband. “I didn’t even think pedophiles were allowed in schools.”

While he may not have literally exposed himself to the group, Mr. Dow certainly exposed his heart by doing what every 32-year-old caucasian auto mechanic from the Pacific Northwest dreams of doing: he dropped his mixtape.

After listening to Wu-Tang Clan for months in his garage, Sam Dow knew all he needed was a crowd for the most fire mixtape release ever. “What better event than a parent-teacher conference?” said Dow. “I mean, who doesn’t like 90s hardcore East Coast rap?” Armed with this mentality, Dow took to the front of the classroom midway through a heated discussion about the annual spring bake sale fundraiser.

“My husband is such a fucking asshole,” said his wife, Cheryl. “I told him to sit the fuck down, but he was like ‘No Cheryl, this is my dream.’  My dream is that he’ll pay off our mortgage, but I don’t see that happening anytime soon.”

As Dow began to promote his seven-track mixtape – “Midlife Crisis” –  Malcolm Dow reportedly saw whatever semblance of social status he had quickly fading away. “As if everyone doesn’t fuck with me already,” said Malcolm. “Now I’ll never hear the end of it.  They’re going to be calling me Eminem Mini for the rest of my life.”

Malcolm went on to describe how his father’s publicity stunt will have far reaching consequences for his academic career, saying, “Kids already make fun of me for wanting to be a hairdresser when I grow up.  Now they’re going to make fun of me because my dad’s a fucking loser,” said Malcolm. “God, I hate that man.”

Though the other parents reviewed his mixtape as, “An offensively amateur attempt at art reminiscent of a baby trying to swim,” and “Situationally inappropriate,” Dow still managed to sell 5 copies of his mixtape to fellow dads who “Hated the music, loved the dream.”

For his part, the younger Dow is hopeful his dad will be able to close this chapter of his life. “I haven’t eaten breakfast in four months,” he stated. “Every time I ask my dad to make me some toast he just puts bread between two of copies of his mixtape and says that the fire from his mixtape will heat the bread.”