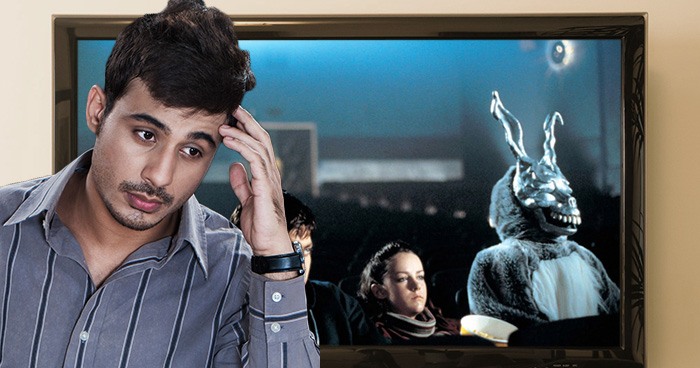 Local adult man Yasin Asfour, 27, suffered a crisis of faith last weekend after re-watching Donnie Darko and Fight Club. Asfour reports that the films were “like, the most important part” of his adolescence, and he watched them “probably over 40 times” between the ages of fifteen and eighteen.

“I just thought those movies were so fucking cool,” Asfour reminisced. “I had a poster of that giant rabbit Frank on my wall for all of Junior year of high school. Who even thinks to make a terrifying rabbit the villain? I thought it was brilliant!”

Asfour, however, was crestfallen to make the realization this past weekend that the plot he used to find “really cool and thought-provoking” he now finds “actually makes zero fucking sense.”

“Why does Donnie need to be tricked into saving the universe? Is the fact that the world is going to end not motivation enough itself?” Asked an exasperated Asfour.

“Also, he totally doesn’t need to kill his mom and his sister. The jet engine could have come off of literally ANY plane. That’s actually pretty fucked up when you think about it. And why Donnie? We’re supposed to believe that a jet comes crashing through the window of the ONE person who has the power to fix space time fabric? I mean that just doesn’t add up!”

When reached for comment, Asfour’s younger cousin Reza responded, “It’s not SUPPOSED to add up! It’s about the universe just, like, not giving a fuck, you know? It’s amazing!”

Asfour fatefully decided he may have better luck with Fight Club, the other movie that demarcated a crucial phase in his adolescence.

“It. Fucking. Sucks.” Asfour lamented, staring at an unfixed point in the distance.

“At sixteen it blew my mind…I thought it was the craziest take-down of corporate America I’d ever seen…it was definitely the only take-down of corporate America I’d ever seen, but still.” Asfour notes that he stopped going to Starbucks for years after seeing the film. “I mean, I still hate Starbucks, but just ‘cuz it sucks, not ‘cuz I want to watch the world burning against the nihilistic backdrop of The Pixies.”

“I made it to the part where Tyler proselytizes, ‘Our fathers are models for God…if our fathers bailed, what does that tell us about God?'” Says Asfour. “I pretty much had to tap out after that.”

Reza, once again, emphatically disagreed when reached for comment, saying, “It’s so sad these sheeple grow up and stop opening their eyes to what’s REAL! My cousin used to be so cool” between sips of Red Bull.

Asfour countered, saying, “If I wanted to see a dick, I could look one up on the internet…I don’t know why I was so stoked on seeing one frame of penis in the credits at age sixteen.”

Though Asfour feels “betrayed and disappointed,” he hasn’t lost all hope. “I’m planning on watching my little sister’s favorite movies from her youth with her this weekend…really optimistic that Thirteen and The Virgin Suicides will still hold up.”