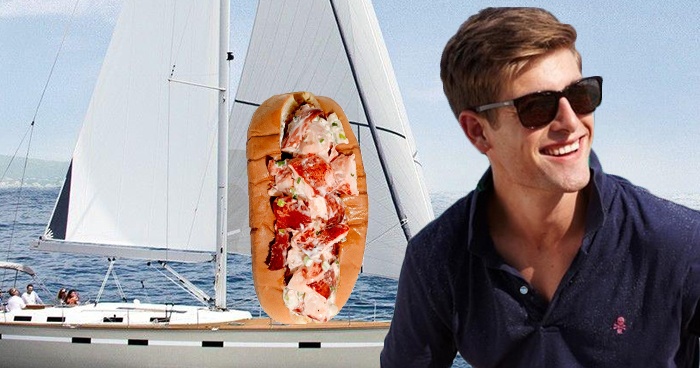 In an effort to better understand his genetic makeup, WASPy guy Crispin Teague III has utilized a DNA testing service to create a personalized ancestry report, the results of which appear to be just a photo of a giant lobster roll on a sailboat.

“For so long I’ve wondered about my family’s background,” Teague explains. “Of course I know who Crispin Teague I and II are, but what about beyond that? Who am I, really?”

The Connecticut native claims that he’s been yearning for a deeper understanding of himself and where he comes from after a recent Taco Tuesday happy hour opened his eyes to the world around him.

“I feel like I see these ethnic types with their rich cultural histories and totally awesome food, and it made me think, ‘Well, that about me?'” he explained. “I want to talk about that kind of stuff on Facebook too.”

While the report began analyzing Teague’s almost entirely northern European lineage, breaking down into precise percentages just where his ancestors originated from, data analysts responsible for creating the final composition of his results thought it equally appropriate to just go ahead and represent the 23-year-old financial associate with bits of lobster drenched in mayonnaise and served in a lightly buttered and toasted hot dog bun.

“After creating countless pie charts for white 20-somethings hell bent on keeping it about themselves without actually having to talk to their elderly relatives, we figured this pretty well summed them all up,” said data specialist Nita Agarwal.

Thanks to the image, Teague was offered a glimpse of the hard past his relatives faced, as evidenced by the roll’s obvious lack of Ray Ban sunglasses, chambray J. Crew shorts, and side of crinkle-cut potato chips.

“It was like one of those bittersweet things,” he recalled. “On the one hand, it was awesome seeing where my ancestors came from, but witnessing the hardships they must have faced was totally not OK. I mean, that sailboat looked like it could only sleep two, and the roll didn’t even have a collar. Plus the bun looked like one of those gross store brands. It really makes you think.”

Teague adds that in addition to the lobster roll, the report did find approximately .0001 percent Native American heritage on his mother’s side.

“It just goes to prove that we’re not so different after all,” he announced in a recent Facebook post, alongside his results. “We really are all one race — the human race.”