Opinion: Before North Korea Starts WWIII You Should Really Give The 2003 ‘Hulk’ Movie Another Look 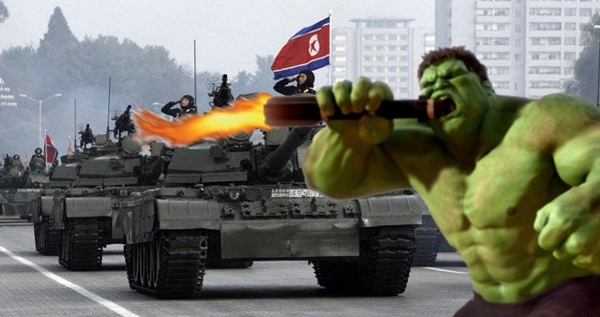 Look, I’m gonna level with you: between North Korea ramping up its nuclear testing and a President whose foreign policy revolves around convincing the rest of the world that he has a big dick, WWIII is all but inevitable at this point. The sooner you accept your impending nuclear annihilation the sooner you can move onto more important stuff, like figuring out how to spend your last few precious hours on Earth. Might I suggest using whatever time you have left to take another look at the movie Hulk?

No, not the one with Edward Norton and that chick from Armageddon, I’m talking about Ang Lee’s criminally underrated 2003 masterpiece starring Eric Bana and Nick Nolte’s mugshot. You know, the one with the mutant dogs. Speaking of which, isn’t it awesome how Lee uses gamma-irradiated “Hulk dogs” to symbolize man’s best friend – in this case science – turning on him? Trust me, it will seem especially appropriate when your teeth start to soften from the radiation sickness. In fact the whole movie is full of metaphors and social commentary that will really give you something to think about while you wait for a nuclear-tipped ICBM to touch down in your backyard.

For instance, the Hulk doesn’t even show up in his own movie until forty-one minutes in, a perfect representation of the grim anticipation you’re no doubt experiencing right now as you wait anxiously for the end to arrive. Hey, it’s all about the journey, right? Well trust me, Hulk is all journey with no payoff at the end, just like real life! In many ways, Hulk was Ang Lee’s way of holding up a green tinted mirror to our souls and daring us to look at the reflection.

Meanwhile, what does the Hulk get big for? Tanks, fighter jets, missiles, you know, the same shit that Kim Jong Un creams his jeans over on the reg. See, it’s a metaphor for how the world when taken as a whole makes man feel small and impotent forcing him to use the military like a big, phallic, patriot-missle sized viagra in order to feel important and powerful. Pretty heavy shit right? Well it gets heavier.

The Hulk also spends a lot of time fighting his father, who may or may not have contributed to Bruce Banner’s general hulk-ness by passing on starfish and sea-cucumber DNA through his semen and then murdering his mom in front of him. And you thought you had daddy issues! There is so much to unpack when it comes to Bruce and his dad’s relationship in this movie that it will keep your brain so busy you won’t have any time to wonder what it will be like to glow in the dark or how painful it will be to slowly die of radiation poisoning.

I’m not saying that re-visiting Hulk will make you see it for some kind of hidden gem – we both know the movie blows harder than Donald Trump when his daughter wears a tight shirt – but the truth is, if you spend your last day with family or watching Game of Thrones you’re just going to want to live that much more and your upcoming demise – courtesy of the worst thing to come out of Korea since Gangnam Style – is going to seem that much crueler. If, however, you instead spend your last day watching Hulk you won’t just make peace with with death, you’ll welcome it. Trust me, if the early ‘00s CGI doesn’t make you want to stand right underneath a falling hydrogen bomb, the end credit song by Velvet Revolver will. That’s a feeling you just aren’t gonna get from any other Marvel film except for maybe Spider-Man 3 but nobody hates themselves that fucking much.