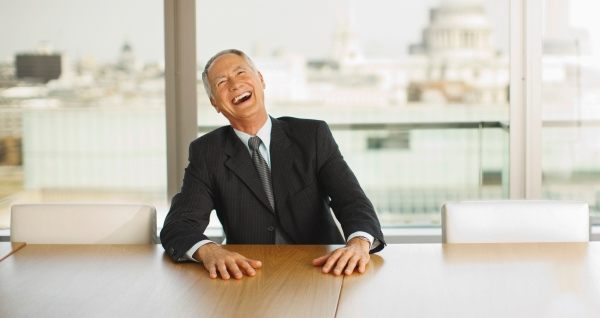 Last week, the Dow Jones skyrocketed due to the largest merger in US history when tech giant Vextros Industries joined forces with communications leader Allied Global. As a result of this super-merger, 85% of all Americans now have the same boss. And that boss is CEO Jeff Leighty, a man with a reputation for multi-tasking and team-building. But how does Leighty deal with heading the nation’s largest work force?

“Well, it has its challenges,” he says, flipping through his index cards of 270 million employee names. Leighty’s set a plan to learn each team member’s name by early 2018. He believes a personal touch is the key to making mergers work.

“We’re one big family,” he says as we stroll the halls of VexGlobal’s offices before stopping into one of the building’s many break rooms. There’s a birthday celebration for employee Steven Gunderdorf (and the 47 other birthday employees waiting to use the room) and Leighty wishes them well before continuing our tour.

Leighty admits there’s a steep learning curve in a merger this size, recounting a story about how he negotiated a contract for VexGlobal’s paper clips for 40% of what Allied Global paid the year previously. Unfortunately, that was before he knew that the newly formed VexGlobal owned a subsidiary called Tros Metallurgy that sold the clips at issue.

Accordingly, his 60% reduced expenditure also cost the company 60% in sales. Our interview is then interrupted by an office PA announcement listing the employees who had died since yesterday. After a moment of silence, the PA crackles, “Also the following 35 employees have just delivered babies.” After the list is read, the announcement continues, “There will be a celebration in the break room… once the birthday celebrations are completed.”

Leighty believes VexGlobal will make it through this period of transition as long as everyone stays positive like one team. At this point, we were forced to address the numerous rumors that VexGlobal’s offices are riddled with improper office conduct between coworkers.

“Look at it this way,” Leighty says while signing a six foot tall baby shower card with all the new moms’ names. “When you have a merger this size, people from all different kinds of companies are suddenly on the same team. It just makes sense to discover that about 65% of them are now having sex with co-worker.”