If God Wouldn’t Give Me More Than I Can Handle, Then Why Did I Puke So Much At Andy’s Party Last Night? 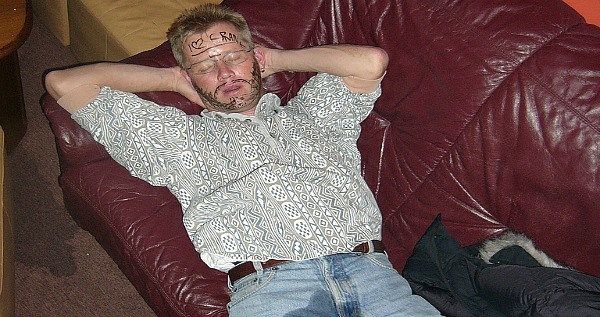 It seems like every time the weight of life is pulling me down, someone I know reminds me not to worry, because, “God won’t give you more than you can handle.”

But if God really wouldn’t give me more than I can handle, then why the hell did I puke so much at Andy’s birthday party last night?

I did all the things I thought I was supposed to do. I stuck to one kind of liquor all night before switching to one kind of beer and then made sure to drink PLENTY of water after all those gravity bong hits but I still ended up getting a big lecture about “alcohol poisoning” from some lady called an “EMT,” or whatever she was.

Was God telling me to eat more bread before I went out and I just didn’t hear him?

People are always really quick to be like, “Jesse, maybe you should take it easy,” and, “No Jesse, no one dares you to play beer pong with Goldschlager,” and, “Did that guy say Goldschlager? I didn’t even know they still made that shit.”

If what you can handle doesn’t make itself apparent until after you’ve already made a onesie (and sometimes a twosie) in your pants, then what the hell is God even doing up there anyway?

If the big man upstairs really is in charge, then why are my friends, family and, most recently, my coworkers who showed up at the office Valentine’s Day gathering in the break room this year, constantly saying things like “Jesse, you have a problem,” and, “Jesse, you’re going to go to prison if you get one more DUI, like seriously, do I need to remind you why you aren’t allowed in Canada anymore?”

Who do they think they are, God?

You see, I think it’s really all about shifting your perspective. Maybe ol’ Jesse doesn’t have a drinking problem, ever think of that? Maybe the city of Madison, Wisconsin just has a mailboxes-getting-in-the-way-of-cars problem. It all depends on how we choose to interpret these things.

But I’ve always been a “glass half-full” type of guy. At least, that’s what my court-mandated probation officer tells me.