I Vaccinated My Kid, And Then A Bear Ate Him 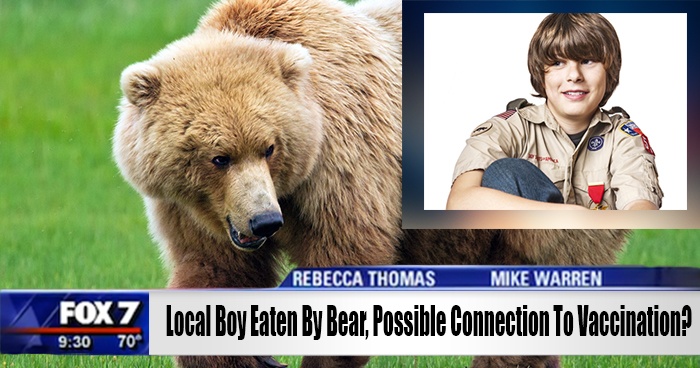 I should’ve known better. My friends from the mother’s group and PTA all told me what vaccines could do to my child. They begged me to keep my child natural and vaccination free, but I didn’t listen. And then a bear ate him.

It all started eleven years ago, when my son Brandyn was born. I had always assumed we would just get him vaccinated, because that’s what “good parents do.” But then I ran into Tammy Granger from down the street.

I was blown away: All three of her three children – Jasper, Kai, and Huntley – were home births in tubs of Jell-O, all three took computer coding classes in Mandarin as toddlers, and all three had completed five-part-triathlons by age seven. What stood out most, however, was that they weren’t vaccinated.

Tammy told me about how her homeopathologist had turned her on to the truth: that vaccines can cause a variety of ailments such as autism, cancer, rickets, scurvy, lopsidedness, and having a fivehead. All a child really needed was a steady diet of Vitamin C and bee pollen to grow up healthy. But I ignored her. I didn’t want to be judged for dovetailing off public opinion. And now, eleven years later, I’ll never forgive myself for not trusting my instincts about vaccines…and bears.

Last March, Brandyn went on a camping trip with his Boy Scout troop in the mountains. At night, he forgot to zip up his tent (a possible symptom of being vaccinated) and a bear wandered onto the campsite. Now, because I made the selfish choice to protect my child from measles and rubella eleven years ago, most of my son resides in the belly of that monster.

The bear tore his clothing apart and dragged him into the woods. They even found his arm resting in a nearby bush. All because he was immunized. The bear must’ve smelled the sodium chloride from his mumps shot.

So please, learn from my mistake. People will judge you and tell you things like “you’re going to get someone else sick,” “natural medicine doesn’t work,” or “drinking your own urine is gross,” but don’t let pride force you into following social norms when it comes to your children – a bear might eat them.