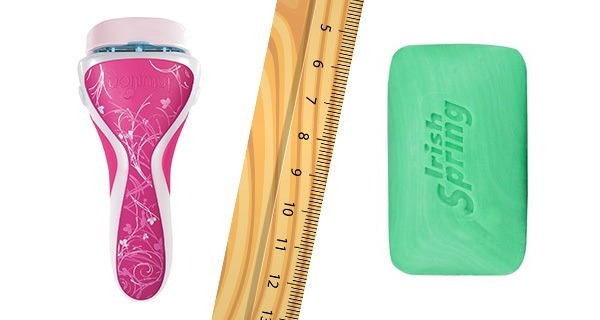 During a shower on Tuesday, Mark Gauss discovered that while his penis is longer than the bar of Irish Spring soap his girlfriend bought for when he showers at her place, it isn’t quite as long as the Schick Intuition razor he found on the middle shelf of the shower caddy.

The research is part of an ongoing study for Gauss who has been trying to find a “solid point of reference” for his penis for nearly twenty years. “Rulers and tape measurers are great, but the results are so technical. The goal is to be able to tell people in terms they’ll understand. Plus, eight inches to one guy is six to another.”

Further experimentation found that when measuring from the bottom of the conditioner bottle, Mark’s dong lands about midway through the ingredient list, right on the line: ‘jojoba, hydroxyethylcellulose, chlorhexidine digluc-.’

“Abby’s shower gave us a wealth of new information. We believe we are getting closer to an exact match; unfortunately it is a process of elimination and we plan to leave no household or office item unturned.” Gauss claims to have once found a Persian cucumber from Trader Joe’s that was ‘basically a replica’ but it eventually shriveled and rotted. “That experience was a major motivator for me to find a parallel item in the world of non-perishables.”

The next phase of the study will include a series of electronic remote controls. “I have high hopes for the Roku remote,” Gauss says this is his second pass with clickers. “Remotes were one of the first test subjects in the beta stage during my early teens, but they make them smaller now, and I am bigger so it’s worth revisiting.”

Gauss expressed the emotional rollercoaster of seeing an object that could be the answer, only for it to be off just slightly. “It’s happened so many times; if you shave a few centimeters of a toilet paper roll, if you take the lid off the cold cream tub, if you drink and flatten a Capri-Sun pouch and then fold it over once where the straw hole is… It can get frustrating, but I still start every day saying, today’s the day! It hasn’t been yet, but it’s coming.”